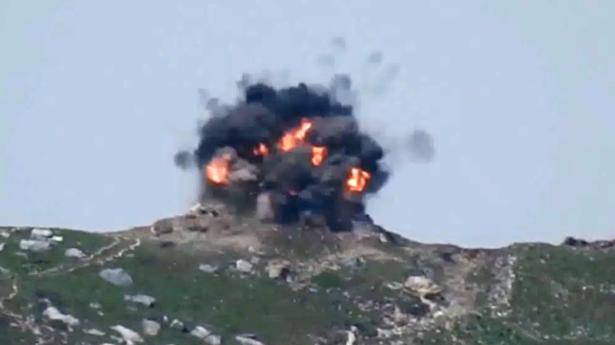 Over 20 were injured in ceasefire violations by the Pakistani Army along the Line of Control in four districts of J&K.

Ten people, including six civilians, three Army soldiers and a BSF jawan, were killed and over 20 others were injured in ceasefire violations by the Pakistan Army along the Line of Control (LoC) in four districts of J&K on Friday.

The Uri Sector of north Kashmir’s Baramulla district witnessed intense shelling and firing from Pakistan throughout the day, targeting around eight villages inhabiting close to the LoC.

“I managed to pick up my four children well in time. If I was just four minutes late, they would have died as a shell exploded near a construction site near our house, leaving two dead,” a local said.

Several locals were seen migrating to safer areas, as scores of houses and sheds of civilians were also hit in the firing and caught fire.

According to the Army, Pakistan initiated unprovoked ceasefire violations along the LoC in multiple sectors, including Dawar in Bandipora, Keran in Kupwara, Uri and Naugam in Baramulla in the Kashmir valley.

The Army said it retaliated strongly, causing substantial damage to Pakistan army’s infrastructure and inflicting casualties across the LoC. “Several ammunition dumps and multiple terrorists launch pads have been damaged,” the Army said.

The Army also released videos that showed mortars hitting and damaging Pakistani bunkers along the LoC.

A BSF spokesman said Sub-Inspector Takesh Doval was also killed and another jawan injured when a mortar shell exploded in Baramulla’s Uri.

Five civilians were injured in north Kashmir’s Bandipora when shelling hit the Bagtore Sector in Gurez. “All the five injured are stable,” an official said.

At least seven civilians were reported injured in the Sawjian Sector in the Pir Panjal’s Poonch in Pakistan shelling. “A bus stand was hit by the shelling, leaving the civilians injured,” an official in Poonch said.

Meanwhile, a Srinagar-based Army spokesman said suspicious movement of infiltrators was also observed at the forward posts along the LoC in the Keran Sector on Friday.

“This was accompanied by initiation of an unprovoked ceasefire violation (CFV) by Pakistan along the LoC in Keran Sector by firing mortars and other weapons. A befitting response is being given,” the Army said.

The India Army is well poised to defeat all attempts by Pakistan to infiltrate terrorists into J&K, the spokesman said.

The National Conference has demanded an immediate end to such skirmishes.

“It is the people of J&K, especially those living on both sides of the LoC or international border who have to face the brunt of skirmishes between the two countries. It’s really saddening to witness innocent lives being devoured like this. We call upon both the countries to immediately stop cross border shelling,” a NC spokesman said.

Peoples Conference chief Sajad Lone condemned the shelling and termed it as “modern day barbarism”. “My prayers with the hapless inhabitants of these areas. May sanity prevail,” Mr. Lone, also spokesman of the Peoples Alliance for Gupkar Declaration, said.

Around 50 other patients undergoing treatment at Welfare Hospital were rescued by locals and firefighters, officials said. At least...
Read more
National

The Election Commission of India (ECI) on Friday made a desperate attempt to obtain an order from the Madras High Court to gag the...
Read more
National

The Opposition Congress has registered a spectacular victory in the elections held to 10 urban local bodies (ULBs) in Karnataka by securing a majority...
Read more
National

Eatala Rajender for probe into land grab charges against minister

The Election Commission of India (ECI) on Friday made a desperate attempt to obtain an order from the Madras High Court to gag the...
Read more

Congress registers emphatic victory in six ULBs, JD(S) in two, BJP in one

The Opposition Congress has registered a spectacular victory in the elections held to 10 urban local bodies (ULBs) in Karnataka by securing a majority...
Read more

Eatala Rajender for probe into land grab charges against minister