UK MPs to debate press freedom, safety of protesters in India next week 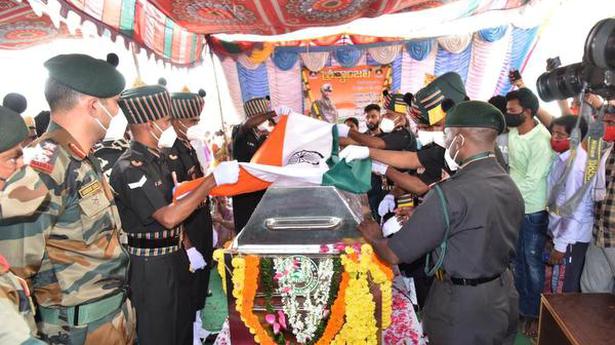 Amid the outpouring of grief by hundreds of villagers, the last rites of slain jawan Ryada Mahesh was performed with full military honours at Komanpally in Velpur mandal of Nizamabad district on Wednesday afternoon.

The mortal remains of the jawan was brought to his home late last night by the Army authorities. The district administration had already made elaborate arrangements at the residence of Mahesh and also at the crematorium on the village outskirts,

Since Wednesday morning, a large number of local residents and some from nearby villages paid floral tributes to Mahesh and offered their condolences to the bereaved family. Roads and Buildings Minister Vemula Prashanth Reddy personally supervised all the arrangements.

Amid slogans of ‘Mahesh Amar Rahe, Jai Jawan Jai Kisan’, the last journey of Mahesh began from his house. A flower-bedecked Army truck carried the mortal remains as it passed through the main streets of Komanpally. Three round were fired in the air as the Army and Police personnel paid their tributes. Father of the slain jawan, Ryada Raju lit the funeral pyre.

Meanwhile, Chief Minister K. Chandrasekhar Rao expressed shock over the martyrdom of Army jawan in the firing that took place at the border. Mr Rao said Mahesh would be remembered in history as the one who sacrificed his life for the country.

Stating that the State government would stand by and support the bereaved family, the CM announced ₹50 lakh financial assistance to them. He said one member of the family based on qualification would be given a government job. Mr. Rao said a house site would also be allotted to Mahesh’s family.

The task force also suggests that the Union Agricultural Ministry should examine scope of including natural rubber under MSP scheme The task force on the...
Read more
National

The task force also suggests that the Union Agricultural Ministry should examine scope of including natural rubber under MSP scheme The task force on the...
Read more

Why does Samajwadi Party’s name get dragged into every incident of crime, asks U.P. CM Adityanath

“Why is it so that the SP’s name gets dragged into every incident of crime? Why?” the Chief Minister asked. Uttar Pradesh Chief Minister...
Read more
Bharat News