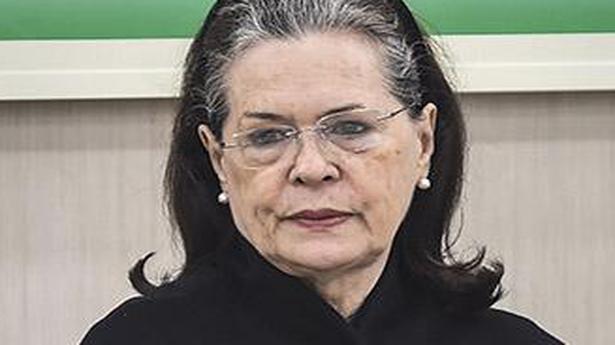 Exactly a week after the debacle in Bihar, Congress president Sonia Gandhi on Tuesday is likely to meet a group of senior party leaders who are part of a recently constituted group to help the party president in organisational and operational matters.

Also read: CWC will review the reasons for poor show in polls: Chidambaram

The meeting comes amid calls for introspection by party leaders like former Law Minister Kapil Sibal who has said the results showed that the party was not seen as an alternative choice and the leadership was treating the defeat as business as usual. Karti Chidambaram, MP, took to Twitter and tagging Mr. Sibal’s comment, asked his party to “ideate, consult and act”.

“Bihar elections, the Gupkar Alliance in Jammu and Kashmir, the next round of Assembly elections could be discussed in a virtual meet,” a member of the Congress’s special committee told The Hindu on Monday. Senior leaders of the group include A.K. Antony, Ahmed Patel, Ambika Soni, K.C. Venugopal, Randeep Surjewala and Mukul Wasnik, who was part of the Group of 23 (G-23) leaders who had questioned the leadership in a letter to Ms. Gandhi.

Mr. Sibal’s latest comment against his party attracted sharp comments from some of his colleagues including Rajasthan Chief Minister Ashok Gehlot.

There was, however, no official reaction from the party on the former Law Minister, who is also part of the G-23.

“There was no need for Mr. Kapil Sibal to mention our internal issue in the media. This has hurt the sentiments of party workers across the country,” Mr. Gehlot said.

“There are various reasons for electoral losses. But each time rank and file of the Congress party has shown undivided and firm belief in the leadership and that is why we came out of it stronger and united after every crises,” he said.

Delhi Congress chief Anil Chaudhary too took a dig at Mr. Sibal and reminded the former Law Minister that he should take some time out to visit the Delhi Pradesh Congress Commitee (DPCC) office as he was a former Lok Sabha MP from Delhi.

“For our democracy to survive, Congress has to survive. Time to act is now or tomorrow may be too late,” said Congress MP Vivek Tankha, coming to Mr. Sibal’s defence.