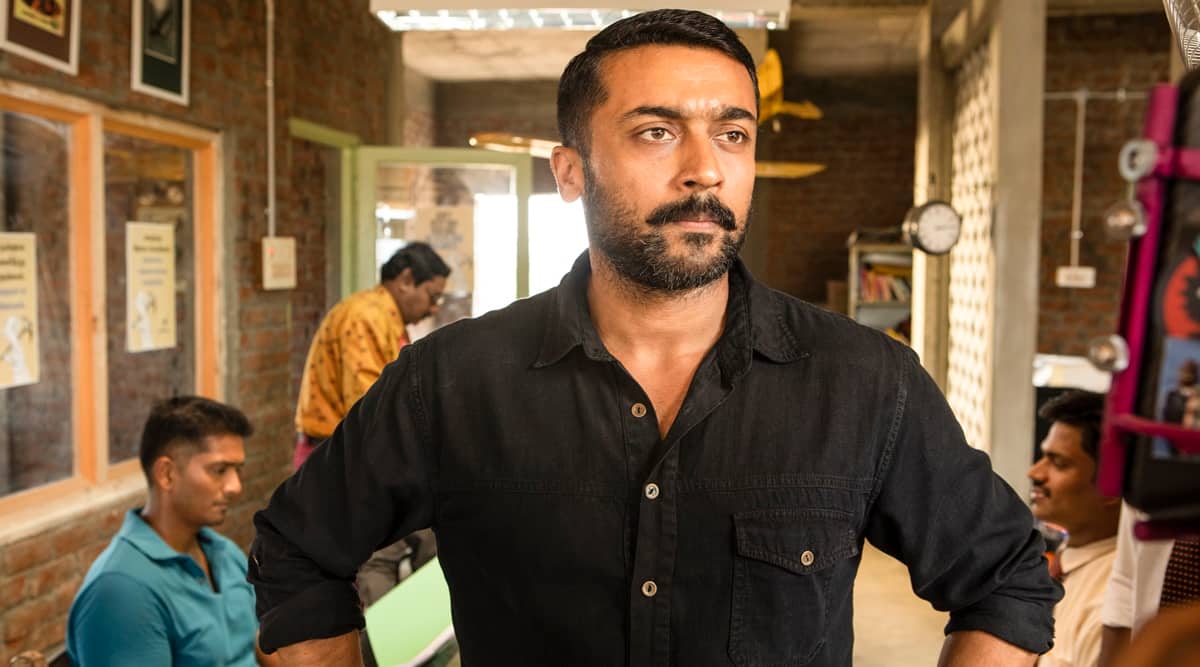 How a young man with dreams in his eyes owned the skies is the story of Soorarai Pottru, in which Suriya plays Nedumaran Rajangam, the pioneer of low-cost aviation in India. Maaran (Suriya), a thinly-disguised version of G R Gopinath and his prolonged battle to start Air Deccan, overcomes one obstacle after another, to put the common man (and woman) in an aircraft, making flying universally accessible.

It is an uplifting underdog tale, where victory was hard-fought, and won. Going by the goings-on in Sudha Kongara’s directorial, Maaran’s troubles were never-ending. His number one enemy, the snooty, elitist Paresh Goswami (Rawal), who wants to prevent ‘coolies and beggars’ from stepping into his airline, keeps snapping at his heels. A corrupt, complicit babu in the Ministry of Civil Aviation keeps finding rules to stop him. And the lack of funds is a continual struggle. What keeps Maaran going is the love of a good woman, Bommi (Balamurali), the belief of countless people from his village, led by his mother (Urvashi), and his conviction that he can do it.

Given all these elements, each more dramatic than the other, the film should have soared. And it does in parts, especially when Suriya and Aparna are jousting, him showing his softer aspects, her refreshingly real, brimming with spunk. As well as some other sequences in which he, along with his two faithful pals, goes full tilt at the challenges strewn in his way: it is Suriya’s way, all the way.

The film is marred, however, by the high-pitched melodrama whistled up every time the script needs to create fan-pleasing moments. Given Suriya’s mega popularity, that is an always present temptation, and the film gives in, much too often. A sequence in which Maaran arrives home to confront his mother’s teary recriminations for missing out on a crucial happening would have been a better fit in a masala entertainer. Oh wait: is this why it is in this movie, which insists on dousing real life with loud reel tamasha?

The film is careful to tell us that it is ‘not’ a biopic, and that it is based on ‘several true stories from low-cost aviation’, so we never quite know who is real, and who has emerged from the creative license claimed by the filmmakers. There’s a Mallya-like character called Ballaiya, who mentions his ‘beer company’ and fun-loving ways. Both Ballaiya and Goswami are drawn as caricatures, as are many other characters who are simply stock, only there to buff up the film’s run-time.

But the incredibly inspirational nature of the story, in which a common man creates history by starting ‘the Udupi hotel of the airline industry’ comes through. Gopinath’s venture meant that class and caste barriers (Suriya speaks of this) were swept aside, and the average Indian could fly. Those faces, wreathed in delight, are the most pleasing takeaways from the film.

Deputy Defense Secretary David Norquist has been asked to serve as the acting Secretary of Defence for President-elect Joe Biden until a permanent...
Read more
World

The penalties are yet another Trump administration move that may make President-elect Joe Biden’s diplomacy with China more difficult when he takes office next...
Read more
World

Called the “American Rescue Plan,” the legislative proposal would meet Joe Biden’s goal of administering 100 million vaccines by the 100th day of his...
Read more

SAG Awards to be held on April 4

The 27th Annual Screen Actors Guild Awards (SAG) will now be held on April 4 to avoid a clash with the Grammy Awards. The move...
Read more

The International Film Festival of India will be held in a hybrid format from January 16-24 this year. The festival was postponed due to...
Read more
Bharat News