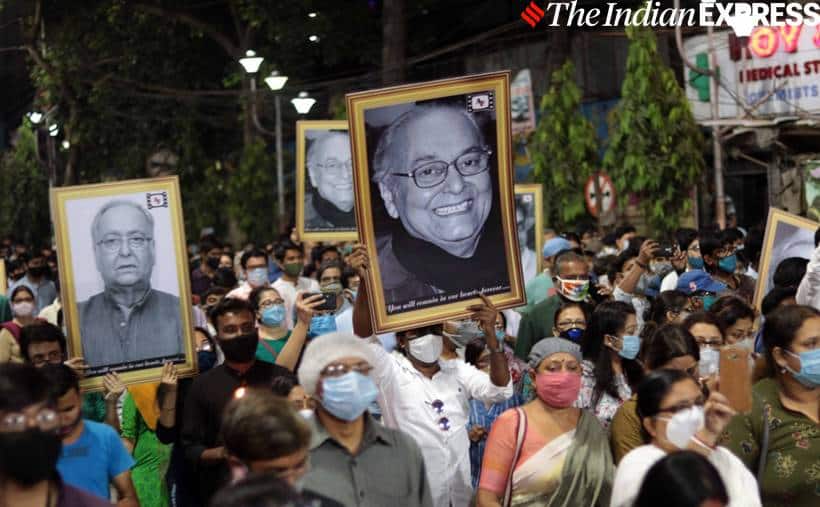 “I can’t believe he is no more,” remarked film director Aparna Sen on hearing the news of legendary actor Saumitra Chatterjee death.

“He was my first hero. I was only 14 when we first met. He and his wife were friends of our family. I became his friend too as I grew up… I still can’t believe that he is no longer with us. I had hoped till the last that a miracle would happen,” Sen, who marked her debut opposite Chatterjee in Teen Kanya anthology, said.

Sen recalled that Chatterjee had on a number of occasions asked her why she did not cast him in her films more often.

“I used to tell him that let me first find a role befitting his stature. I had cast him in Paromitar Ekdin, and that was one of his memorable performances. I told him I would cast him again if I find roles that can do justice to someone as talented as he was,” she said.

Sharmila Tagore, who had shared screen space with Chatterjee in Ray’s Apur Sansar, Devi and Aranyer Din Ratri recalled many happy moments that she had shared with the thespian. “We shared a great rapport. He had a childlike innocence and simplicity. He used to read and write a lot. He was a cerebral personality,” Tagore said.

Tagore said though Chatterjee had been in the hospital for over a month, at some point of time everyone hoped he would recover. “I have lost a friend of many years, a loyal friend,” she said.

“While he was associated with Satyajit Ray, he also gave wonderful performances in movies of other directors as well. He was a very erudite person. I remember listening to him and (actor) Subhendu Chatterjee as they discussed politics and literature for hours while we were shooting for Ray’s Aranyer Din Ratri,” she said.

Her daughter Soha Ali Khan shared a picture of the legendary actor with Sharmila Tagore and wrote, “ We will miss you.”

Actor Rahul Bose said working with Chatterjee was “a surreal experience”. “So working with him in 15 Park Avenue was surreal. He answered all my questions on how it was to work with Satyajit Ray with generosity and warmth. It’s been a privilege, Soumitrada. Rest in peace,” he tweeted.

Several members of the film industry also remembered the actor and paid their respect on social media.

Actor Manoj Bajyapee termed Chatterjee’s demise a “tragic loss”. “Your contribution to the Indian cinema will always be remembered and inspire the generations to come,” Bajpayee tweeted.

Writer, lyricist and stand-up comic Varun Grover tweeted, “The world will keep revisiting your eyes, stories, and gentle mystery Soumitra Da – as if they are an ancient mantra.”

Filmmaker Onir said Chaterjee’s death was an “end of an era for Bengali Cinema”.

“I have no words to express my grief. Great loss for the Indian and world cinema,” tweeted music director Jeet Ganguly.

Veteran actor Shabana Azmi tweeted, “Farewell Soumitra Da. I had the honour of playing your wife in La Nuit Bengali and your daughter in 15 Park Avenue. I was with you in Paris and saw the adulation you received at George Pompidou Centre but you were so nonchalant about it that it left me deeply impressed. RIP.”

Filmmaker Sudhir Mishra said, “A great cinema actor. Unfortunately, the rest of India never gave him his due but the world did. Our very own Marcello Mastroianni. Perhaps the greatest cinema actor of his generation in India. Never obstructed the story telling. Never called attention to himself.”