Soumitra Chatterjee, one of India’s tallest actors, dies at 85 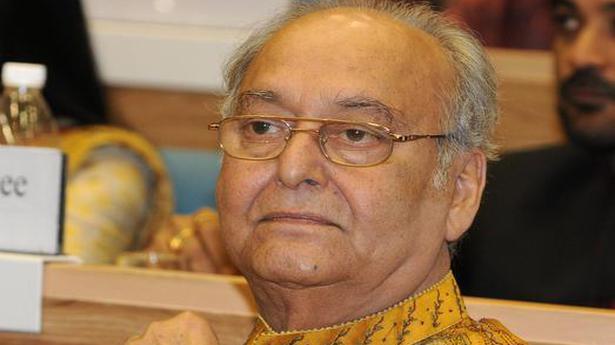 He was admitted to a hospital in Kolkata with COVID-19 symptoms.

Bengali superstar and one of India’s tallest actors, Soumitra Chatterjee, widely admired for his roles as Apu and Feluda, has died after fighting for his life since October 6, when the 85-year-old was admitted to Kolkata’s Belle Vue Clinic with symptoms of COVID-19.

Though he had subsequently tested negative for the virus, the infection and the prolonged stay in ICU had severely affected the functioning of his vital organs, particularly his central nervous system. His death was formally announced by the hospital at 12.15 p.m. on Sunday — the day following Deepavali.

That the actor — who debuted in Satyajit Ray’s Apur Sansar in 1959 and acted in over 300 films, working until his recent hospitalisation — was very close to death had become evident on Deepavali eve when critical care specialist Dr. Arindam Kar, who headed the team of doctors attending on him, said they were hoping for a miracle.

While the sad news wasn’t entirely unexpected, given his age and the complications he had developed after contracting COVID-19, the formal announcement of his departure numbed Kolkata, his home, and shocked fans across the globe. Far from being someone who led a retired life at 85, this winner of the Dadasaheb Phalke award was busier in his final years than ever and several of his films are still awaiting release.

Tributes poured out on Twitter. While President Ram Nath Kovind said the Indian cinema had lost one of its legends, Prime Minister Narendra Modi, in his condolence message, said the actor, through his works, had come to embody “Bengali sensibilities, emotions and ethos.”

West Bengal Chief Minister Mamata Banerjee, who rushed to the hospital on learning of the actor’s demise, tweeted: “Feluda is no more. Apu has said goodbye. Farewell, Soumitra (Da) Chatterjee. He has been a legend in his lifetime. International, Indian and Bengali cinema has lost a giant. We will miss him dearly. The film world in Bengal has been orphaned.” The most common sentiment expressed by fans was that legends like him don’t die — they live on.

As actors, Soumitra and Uttam Kumar were the two most popular faces in Bengal — no one else came close. The latter was older by nearly a decade but they died 40 years apart — incidentally, in the same hospital. It was also at this hospital that Soumitra’s mentor Satyajit Ray received his Oscar and spent his final days in 1992.

“[Soumitra] proved himself to be a warrior, fighting valiantly till the last. He cooperated with the doctors and gave his best. But destiny had other plans — and who can fight destiny,” one of the doctors who had attended on the actor told The Hindu. “No one else could have fought this long in spite of advanced age and the severity of the infection and multiple co-morbidities.”

A fire broke out in a cold storage in the Ballari Industrial Area on the outskirts of Ballari city at around 8 p.m. on...
Read more
Bharat News