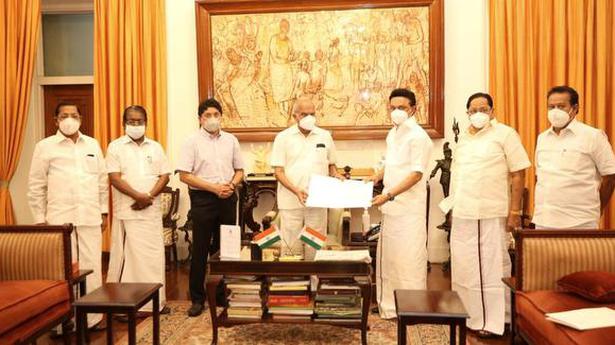 DMK president M.K. Stalin on Tuesday met Tamil Nadu Governor Banwarilal Purohit at the Raj Bhavan, and urged him to take a decision on the release of seven life convicts in the former Prime Minister Rajiv Gandhi’s assassination case. He later expressed satisfaction over the meeting.

“We are satisfied with the reply of the Governor,” Mr Stalin told reporters after the meeting but did not elaborate on what Mr. Purohit told him.

Asked whether the Governor explained the reason behind the delay in taking a decision even though two years have passed since the Tamil Nadu Legislative Assembly adopted a resolution in favour of their release, Mr. Stalin said the DMK also explained the legal position of the issue. “We pointed to the release of the AIADMK men who were convicted in the Dharmapuri bus burning incident in which three college girls were charred to death. We also told him about that this case of the Rajiv Gandhi assassination convicts should be approached from a humanitarian angle, since they have been in jail for 29 years,” Mr. Stalin said.

He said that the struggle of Arputhammal for the release of her son Perarivalan, one of the convicts, was also brought to the attention of the Governor .

“The CBI has already told the Supreme Court that it has no power on deciding their release. Now it is for the Governor to consider their request and take a decision,” Mr Stalin explained.