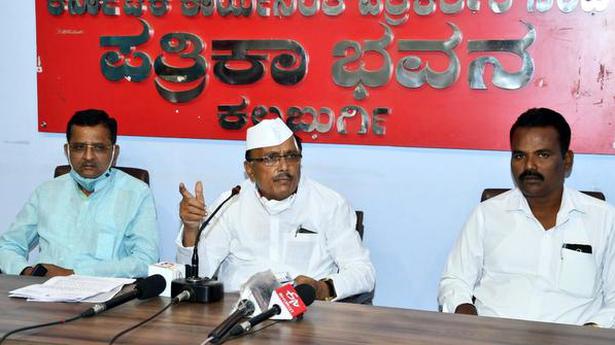 Criticising those sugar factories in the State that have not declared Fair Remunerative Price (FRP) fixed by the Union government for the knowledge of sugarcane growers, the former Aland MLA B.R. Patil has urged the State government to book cases against such non-compliant factories.

“The harvest of sugarcane has already begun and the produce is being accepted by factories. The Union government has, on October 13, 2020 fixed different ex-gate FRP for all the 62 sugar mills in the State. It is the responsibility of each one of the factories to notify farmers concerned. However, many factories have not informed farmers at what rate they would pay for the produce. The factories are already accepting the produce keeping farmers in the dark by not declaring the price,” Mr. Patil said.

He was addressing a media conference in Kalaburagi on Thursday.

Citing the instance of a sugar mill run by NSL Sugars Ltd. in Aland, Mr. Patil said that the Union government had fixed a Fair Remunerative Price of ₹ 2,756 a tonne and the factory authorities have not announced the price but have begun procuring sugarcane.

Mr. Patil also took serious exception to what he called irrational harvest and transportation costs being charged from farmers and demanded that the Deputy Commissioner convene a meeting to fix rational and scientific fees.

“NSL Sugar Factory in Aland is charging ₹ 850 for harvesting and transporting each tonne of sugarcane from farmers field to the factory. It is irrational as the fees are the same for those fields close to the factory and those far away. The factory is also harvesting and transporting crops from fields in Telangana that are as far away as 250 km away. The higher transportation costs incurred in such cases are recovered from local farmers. It is unacceptable,” Mr. Patil said.

“If the FRP fixed by the Union government is not satisfactory, the State government has the authority to fix SAP and ask the sugar mills to comply with it. The situation is so pathetic that the SAP committee, which is presided over by the Sugar Minister, has not been constituted in the last three years. I urge Chief Minister B.S. Yediyurappa to constitute the committee at the earliest and fix SAP as FRP is not satisfactory,” he said.

Pointing to the non-compliance in the payment of FRP by sugar factories last year and the subsequent interim order by the High Court of Karnataka for immediate relief payment of ₹ 100 for each tonne of sugarcane procured from farmers, Mr. Patil said that even the High Court order has not been followed.

“NSL Sugar Factory in Aland and another factory in Yadgir have not paid farmers as per FRP last year. When farmers moved the High Court, the latter passed an interim order asking the factories to pay farmers ₹ 100 a tonne of sugarcane procured as immediate relief. Even that order has not been complied with. We will wait for another 15 days and, if the payment is not made, then, we will file a contempt petition,” he said.

The Bombay High Court at Goa on Wednesday said, “Whatever cylinders are available, it is time the government takes control of them and distributes...
Read more
Bharat News