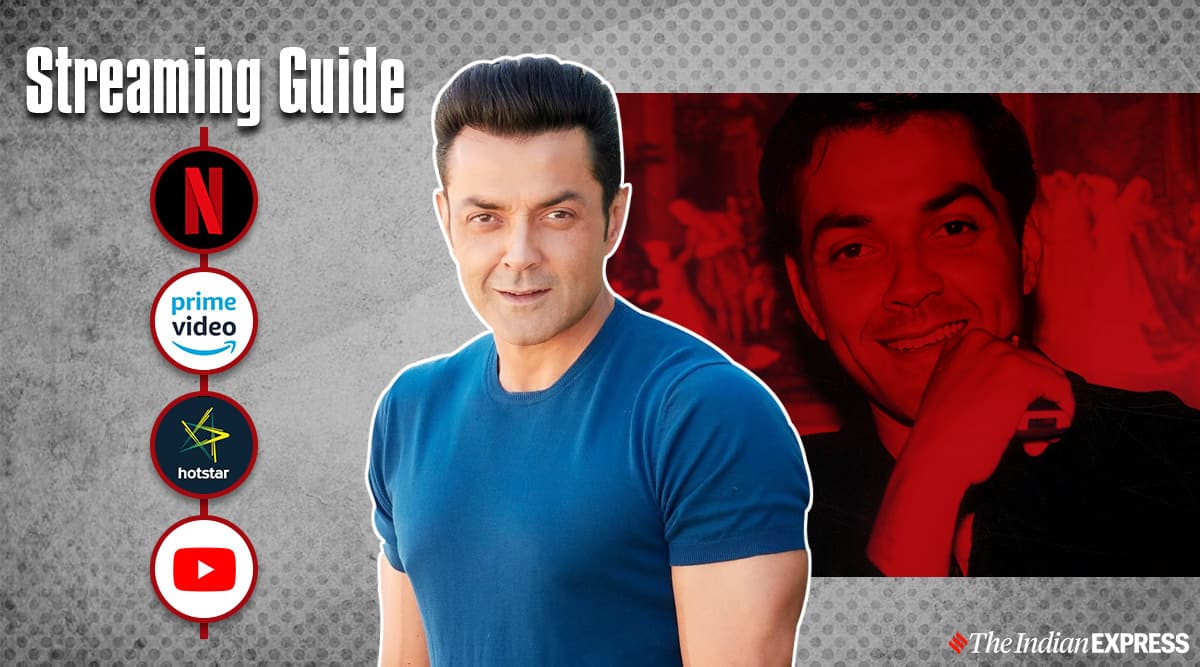 In our series Streaming Guide, we list the works of a filmmaker or actor which are available on streaming platforms like ZEE5, Netflix, Amazon Prime Video, Disney Plus Hotstar, Eros Now and YouTube among others.

This edition features Bollywood actor Bobby Deol who has films like Barsaat, Gupt, Humraaz, Ajnabee and Class of 83 among more to his credit.

Barsaat, helmed by Rajkumar Santoshi, stars Bobby Deol and Twinkle Khanna in the lead roles. Bobby plays a sweet, innocent boy Badal who shifts base from a village to a city for higher studies. In the college, he falls in love with a rich girl Tina, but her stepfather is against their relationship. The film’s songs “Humko Sirf Tumse Pyaar Hai” and “Nahin Yeh Ho Nahin Sakta” are still popular among 90s kids.

“Duniya Haseeno Ka Mela”, these are words that come to your mind instantly as you hear the name of 1997 film Gupt. Well, apart from the film’s music, it is its narrative that keeps you hooked. The Rajiv Rai directorial revolves around a murder which has many suspects. Kajol is a complete stunner in a villainous role, and Bobby Deol’s style quotient cannot be missed.

In Abbas Mustan’s 1998 film Soldier, when Bobby Deol walked against the backdrop of a sunset and the song “Soldier Soldier” played, he set many hearts racing. Preity Zinta and Bobby Deol made for a good looking couple in the movie. However, the revenge drama didn’t manage to impress viewers. You can still give the film a shot if you are in a mood to watch a typical Bollywood masala entertainer.

Streaming on: Disney Plus Hotstar

Sunny Deol made his directorial debut with Dillagi. He also starred in the film along with Bobby Deol and Urmilla Matondkar. The film revolves around two brothers, played by Sunny and Bobby, who fall for the same girl (Urmila). Being a dutiful elder brother, Sunny’s Ranvir lets go his ladylove for his younger brother. There is nothing extraordinary about the story of Dillagi but watch it for the camaraderie between the Deol brothers.

Streaming on: Disney Plus Hotstar

Starring Bobby Deol as freedom fighter Bhagat Singh, the Guddu Dhanao directorial chronicles the events that led to the hanging of Bhagat Singh, along with his companions Sukhdev and Rajguru, on March 23, 1931.

The Abbas-Mustan directorial stars Bobby Deol, Akshaye Khanna and Amisha Patel in the lead roles. It is a romantic thriller which deals with complex relationships, misplaced ambition and greed. Humraaz found many takers way back in 2002.

Some movies are so bad that they are good, and Abbas-Mustan’s Ajnabee is one such film. Forget logic when you stream this Akshay Kumar, Bipasha Basu, Bobby Deol and Kareena Kapoor-starrer. But since “Everything is planned” well by the writers of the movie, you can enjoy the plot twists that happen at regular intervals.

Directed by Anil Sharma, Apne is a heartwarming film which focuses on the bond between a father and his sons. It brought together the three Deols, Dharmendra, Sunny and Bobby for the first time.

Featuring Priyanka Chopra, Abhishek Bachchan, John Abraham, Kirron Kher, Bobby Deol and Boman Irani in pivotal roles, Dostana is the story of two men, Sam (Bachchan) and Kunal (Abraham), who lie about being gay to rent an apartment in Miami. But the two fall in love with their landlady (Chopra). If you have nothing to keep you busy this weekend, Dostana can be a decent pick.

The Samir Kaushik directorial is a nonsensical comedy-drama where all the three Deols – Dharmendra, Sunny and Bobby, come together to tickle your funny bone. So, switch off your brain for a while, and stream Yamla Pagla Deewana to enjoy some good laughs.

Bobby Deol made his digital debut with Netflix’s Class of 83, produced by Red Chillies Entertainment. The official synopsis of Class of 83 reads, “A hero policeman, shunted to a punishment posting as the Dean of the police academy, decides to punish the corrupt bureaucracy and its criminal allies in return by training five lethal assassin policemen. But, like all good plans, it only works for a while until the fire that he has ignited threatens to burn down his own house.”