Stripes to the rescue: stuffed tigers scare off food-stealing simians

Eid-ul-Fitr on May 14, Kerala to celebrate it on Thursday 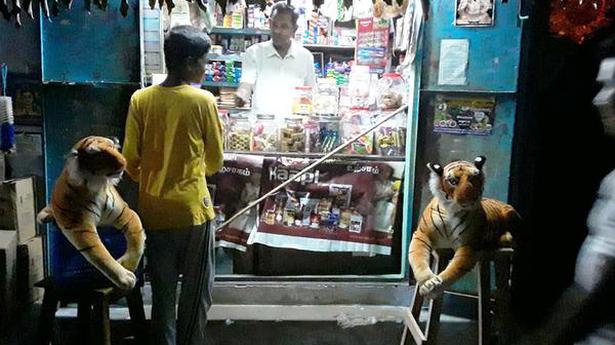 Large, stuffed tigers welcome visitors to shops in remote villages of the Anamalai Tiger Reserve (ATR). However, not all of them are for sale.

Having exhausted all other options, shopkeepers have placed the toys in front of their outlets to scare off bonnet macaques that come looking for food, ranging from plantains to large jars of peanuts.

N. Palanisamy, whose family has been running a grocery store at Navamalai for the last 60 years, said the intrusion by monkeys had reduced by 90% after he placed a large, stuffed tiger in front of the store three months ago. “Monkeys used to cause damage to the tune of ₹2,000 to ₹3,000 a month. They would take biscuit packets, plantains, dal, nuts and anything else they deem edible. They once lifted a jar of cashew nuts worth ₹2,000,” he said.

He bought a stuffed tiger from Salem after hearing that shopkeepers in other villages of ATR, like Sarkarpathy and Kadambarai, had been placing replicas of the big cats to scare monkeys.

“Sometimes, I play clips of tigers roaring on my mobile phone and walk around the shop with the stuffed animal,” he said.

Besides stealing food, the monkeys cause trouble in the Electricity Department quarters at Navamalai, which houses 100 employees.

Monkeys atop washed clothes hung out to dry are a common sight. Employees are forced to wash their clothes again because of dirt or fear of parasites, Mr. Palanisamy said.

Pollachi Forest Range Officer V. Pugalendhi said places like Navamalai, Sarkarpathy and Kadambarai are situated within the forest limits, and hence, capturing monkeys for relocation may not bring the desired results as new troops may replace those that have been captured.

He noted that the Forest Department had captured bonnet macaques that were causing a menace in the urban areas of Pollachi, and had released them into the forest.

Inflation eases to 4.29%; base lifts IIP

‘Consider conducting an audit on use of Remdesivir by hospitals for treating COVID-19 patients’ The High Court of Karnataka on Wednesday directed the State government...
Read more

‘Consider conducting an audit on use of Remdesivir by hospitals for treating COVID-19 patients’ The High Court of Karnataka on Wednesday directed the State government...
Read more
Bharat News