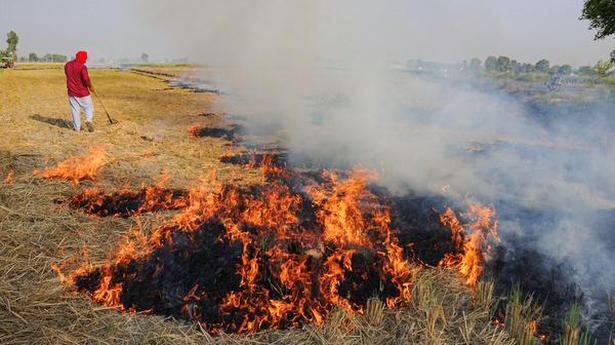 According to data released by the Punjab Remote Sensing Centre, the State recorded 73,883 incidents of stubble burning between September 21 and November 14, which is the highest since 2016

Punjab has recorded around 74,000 incidents of stubble burning this season, the maximum in four years, with experts saying anger over farm laws and the government not paying the Supreme Court-ordered financial incentive to farmers could be among the reasons for the spike in farm fires.

According to data released by the Punjab Remote Sensing Centre, the State recorded 73,883 incidents of stubble burning between September 21 and November 14, which is the highest since 2016.

An official from the Indian Agricultural Research Institute (IARI) said the incidents of stubble burning hit the peak between November 4 and November 7.

According to the Ministry of Earth Sciences’ air quality monitor, SAFAR, the share of stubble burning in Delhi-NCR’s pollution peaked to 42 % on November 5, when 4,135 farm fires were recorded in the region.

“It was a bumper harvest this year, so the amount of crop residue was also large. Also, it was a cloud-free season as compared to last year. The biomass was drier and prone to burning.

“It also appears that the farmers are not willing to cooperate. There could be anger over farm Bills,” he said.

According to a Punjab government official, “farmers are not happy” as the ruling dispensation has not disbursed the financial incentive to them as directed by the Supreme Court to prevent stubble burning.

Following the apex court’s guidelines to incentivise farmers to stop stubble burning, the governments of Punjab and Haryana announced a bonus of Rs 2,500 per acre for small and marginal farmers last year. Farmers say the incentive can help them cover the cost of fuel used in operating machinery for in-situ management of stubble.

Harinder Singh Lakhowal, the general secretary of the Bharatiya Kisan Union, Punjab, also said the number of farm fires is “very high this year and anger over farm bills is one of the major reasons“.

“Unavailability of labourers — many returned to their native states due to the COVID-19 pandemic — is also a reason why farmers are burning stubble to clear the fields quickly,” he added.

The IARI official said the increase in the number of incidents of stubble burning does not mean that the policy of providing farm equipment for in-situ management of crop residue has failed.

“The numbers of stubble burning incidents in Haryana and Uttar Pradesh tell a different story altogether. The figures have come down significantly,” he said.

According to IARI’s data, Haryana recorded 4,699 farm fires between October 1 and November 12 while Uttar Pradesh reported 2,288 such incidents during the period, which is the lowest in both the states in the last five years.

“In Punjab also, the number of cases was reducing every year till 2019. Only 2020 has been the ‘odd’ year out,” the IARI official said.

According to a study conducted by IARI scientists in Tarn Taran and Amritsar districts of Punjab, stubble burning incidents between October 1 and October 10 in Amritsar increased from 180 in 2019 to 515 in 2020 — a rise of about 2.9 times.

“It is estimated that the harvested area increased by 35,500 hectares in Amritsar and by 39,300 hectares in Tarn Taran by October 10 this year as compared to last year.

“It indicates a significant early harvesting of paddy in these two districts this year, which may be on account of early planting of paddy by about 7-10 days, an increase in the proportion of area under short-duration varieties, and a clear weather during 2020 as compared to a cloudy weather in 2019 during the same period,” the study said.

Punjab, Haryana and Uttar Pradesh attract attention during the paddy harvesting season between October 15 and November 15.

Farmers set their fields on fire to quickly clear off the crop residue left behind after harvesting paddy and before cultivating wheat and potato. It is one of the main reasons for the alarming spike in pollution in Delhi-NCR.

Last year, Punjab produced around two crore tonnes of paddy residue, of which 98 lakh tonnes were burnt by farmers.

Despite a ban on stubble burning in Punjab and Haryana, farmers continue to defy it as there is a short window between the harvesting of paddy and the sowing of wheat.

The high cost of manual or mechanical management of straw is a major reason why farmers choose to burn it.

Firoz Khan, a pet breeder at Kundayithode in Kozhikode, shocked a lot of people when he started breeding edible worms a while ago. Now,...
Read more

After almost a year of restricting themselves to home over COVID-19 fears, senior citizens in Telangana took frail steps towards a relatively normal life...
Read more
Bharat News