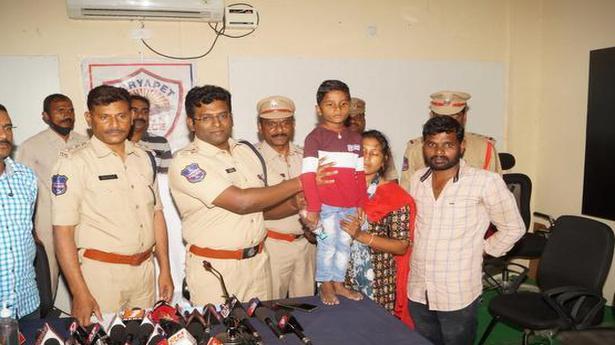 The five-year-old boy who was kidnapped from Bhagat Singh Nagar in the town, in the thick of Diwali celebrations on Saturday evening, was brought home safely on Monday by Suryapet police.

Superintendent of Police R. Bhaaskaran on Monday handed over the boy to his parents Naga Lakshmi and Mahesh at the district police office, before addressing the press.

The five-year-old went missing around 7.30 p.m. on Saturday, after his mother gave him a ₹ 50 note and sent to the nearby kirana store for getting oil for lamps and a matchbox. Soon, only his little bicycle was found around the street corner and the parents filed a a missing person’s complaint and till the next morning coordinated searches continued.

According to Mr. Bhaaskaran, the first and the only clue was the unidentified person’s call to a ladies’ tailor, located behind the boy’s house, at around 9 a.m. on Sunday.

“The accused, during their reconnaissance of the area, were smart enough to collect phone numbers from to-let boards and business flexies in the colony. All their eight calls, except one, were made from phones of passersby or auto-rickshaw drivers, followed by number deletion and blocking. The only call from their personal phone was for ransom collection, which established their location as Miryalaguda. But the actual location, of the person with the boy, as per CCTV footage was Hyderabad,” he explained.

The Suryapet police, wrote the investigation script and also directed the screenplay, with Mahesh, the boy’s father as the actor in the foreground.

“Ransom negotiation started at ₹ 10 lakh and was finalised for ₹ 7 lakh. As the boy’s safety was utmost priority, we made the father to listen from his son in every call, and also to insist that the ransom collection and handing over of the boy should be at the same location,” Mr. Bhaaskaran said, explaining the plot.

At around 3.30 p.m., the father left the ‘cash bag’ as per kidnapper’s specification in Miryalaguda, and the boy was taken from a nearby government school. Immediately, the police who were observing from a distance arrested one of the kidnappers near the site, and the two others who had escaped to their home in Macherla in Guntur, were arrested there on Monday morning.

Mr. Bhaskaran said the arrested three were looking to make a quick buck, and the boy was not a specific choice. The Superintendent of Police appreciated his various teams that moved with a clockwork precision in rescuing the boy safely.

The Central government is all set to accelerate the first phase of COVID-19 vaccination drive by roping in additional...
Read more
National

The Kapil Sharma Show is set to go off air temporarily. The comedy show on Sony TV will undergo a few creative changes and...
Read more
World

‘Do not travel to India-Pak border’: U.S. updates travel advisory to...

The Central government is all set to accelerate the first phase of COVID-19 vaccination drive by roping in additional vaccination sites and allowing walk-in...
Read more

K. Sudhakar and J.C. Madhuswamy have got back the portfolios they were divested of earlier. The allocation of Cabinet portfolios is turning out to...
Read more

India is celebrating its 72nd Republic Day on Tuesday across the country, albeit in a muted manner due to the pandemic. Meanwhile, farmers protesting the...
Read more

The artwork showcases beautiful old buildings in the backdrop in light saffron hue along with people in the front in green shade, with the...
Read more
Bharat News