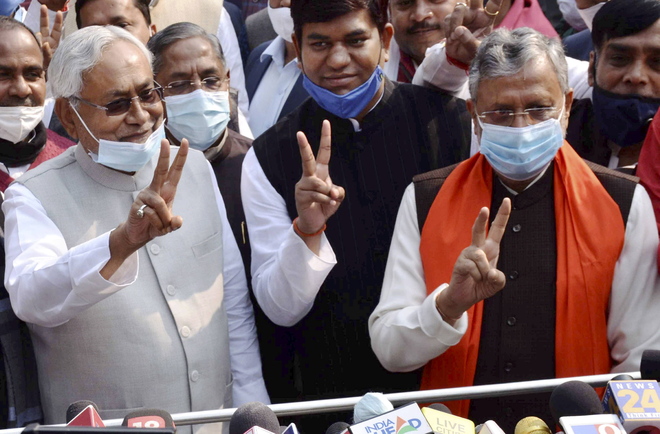 Patna: Veteran BJP leader Sushil Kumar Modi on Wednesday filed his nomination papers for byelection to a Rajya Sabha seat in Bihar which has been necessitated by the death of Union minister Ram Vilas Paswan. Modi filed his nomination papers at the Patna Commissioner office in presence of a host of leaders of the ruling NDA, most notable being CM Nitish Kumar, whose deputy he had been for more than a decade. PTI

Chandigarh: Lt Gen Rajeev Chaudhary has taken over as the Director General, Border Roads Organisation (BRO). He succeeds Lt Gen Harpal Singh, who has been appointed as the Engineer-in-Chief of the Indian Army. He will be responsible for construction and maintenance of strategic and tactical roads along the border in the northern, western and eastern theaters. TNS

SC refuses to allow Vedanta to restart its TN plant

New Delhi: The Supreme Court on Wednesday rejected a petition by Vedanta Ltd to restart its Sterlite copper unit at Tuticorin in Tamil Nadu which has been closed since May 2018 over pollution concerns. A Bench headed by Justice RF Nariman wasn’t convinced with the company’s arguments that it wanted to operate it for four weeks to assess the pollution level. However, it said the final hearing would take place after physical hearings commence next year. TNS

Shocking facts in probe against Kappan, UP tells SC

New Delhi: The UP Government on Wednesday told the Supreme Court on Wednesday that shocking findings have emerged in the probe against Kerala journalist Siddique Kappan even as his counsel referred to Arnab Goswami’s case to underline the need for grant of bail. TNS