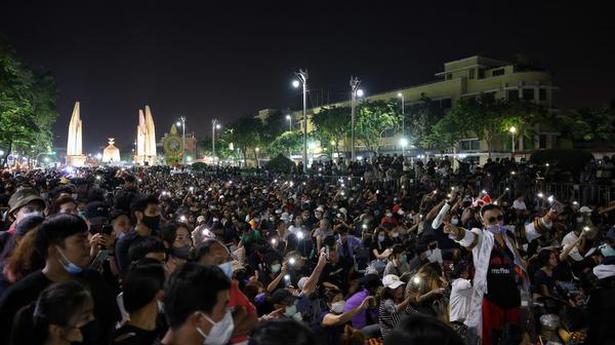 Thai pro-democracy protesters scaled a Bangkok monument on November 14 night to unfurl a giant banner scribbled with anti-government slogans and calls to reform the monarchy.

The kingdom has for months seen massive student-led demonstrations calling for the resignation of Prime Minister Prayut Chan-O-Cha who rose to power in a 2014 coup as well as a new constitution and changes to how the royal family operates.

A crowd of several thousand turned out for a carnival-themed rally dubbed “Mob Fest” at the Democracy Monument, a major intersection in Bangkok.

In the afternoon, high school students and other pro-democracy demonstrators wrote in marker pens and spray-painted messages on giant white sheets.

“You have been stealing my bright future,” one message said. “Democracy will win.”

Bangkok graphic designer Pearl, 25, watched as a group of protesters used ladders to climb up the three-metre (nine-foot) high central turret of the Democracy Monument, as musicians played a drum beat.

“This is a symbolic act of free speech,” she told AFP.

Protesters sang a Thai version of Les Miserables “Do You Hear the People Sing?” and the crowd raised their hands in three-finger salutes — a pop culture reference to the “Hunger Games” movies.

Earlier, they turned their backs and did the same gesture as the royal motorcade drove past.

King Maha Vajiralongkorn and Queen Suthida were en route to open a new train line elsewhere in the city — with thousands of royalist supporters wearing yellow turning out to show support.

In the afternoon, angry high school students calling themselves the Bad Student movement rallied outside the Thailand Education Ministry before marching to join the main rally.

They want Education Minister Nataphol Teepsuwan to resign and staged a fake funeral for him.

“He has failed to reform the education system so he is dead to us,” Anna 15, told AFP, as she put flowers into a wooden coffin, next to a picture of the Minister.

The students are calling for an overhaul of the school system, curriculum, strict rules, dress codes and standardised haircuts.

Thai authorities deployed 8,000 police to patrol the November 14 protest, which is expected to go until midnight.

Police used water cannon against demonstrators at a rally on November 8. It was only the second time such tactics were used.

Not ‘100% satisfied’ with Maha Vir Chakra awarded to Col. Santosh...

“He should have been honoured with the Param Vir Chakra,” Col. Babu’s father said. The father of late Colonel Santosh Babu on January 26...
Read more
Entertainment

The centre-right Reform Party, chaired by Ms. Kallas, and the left-leaning Centre Party, which are Estonia's two biggest political parties, clinched a deal on...
Read more

Russia had initially introduced the travel restrictions on March 16, 2020 to prevent the novel coronavirus from spreading. Russia lifted a travel ban for...
Read more