The Hindu Explains | Why did India stay out of the RCEP deal? 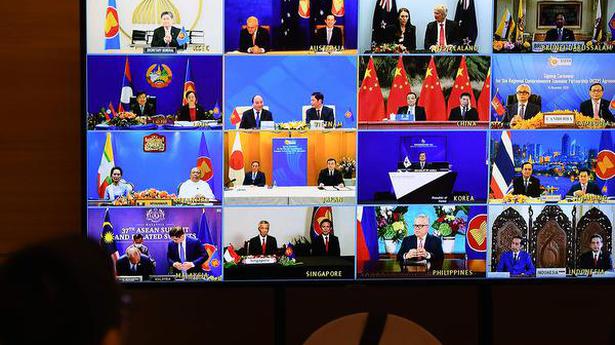 What were its concerns and is there an possibility of rejoining the grouping later?

The story so far: On November 15, the Regional Comprehensive Economic Partnership (RCEP) was signed by 15 countries led by China, Japan, South Korea, Australia, New Zealand, and the 10-country ASEAN group. It is billed as one of the world’s largest Free Trade Agreement (FTA), accounting for nearly 30% of the global GDP covering 30% of the world’s population. After long negotiations, India exited the grouping last November, saying it wanted to protect its economy from rising trade deficits with a number of RCEP members. India’s decision is still the subject of much debate, and the RCEP has left a special window open for India to rejoin at a future date.

Are FTAs ​​bad for India? What are the other objections to RCEP?

Of the 15 countries in RCEP, India had previously signed an FTA with the Association of South East Asian Nations (ASEAN), and also with Japan and South Korea, all three of which are now under review. “If you look at India’s experience with the already signed free trade agreements with the ASEAN group, South Korea and Japan, you will see that India’s trade deficit with these countries or groups rose very sharply during this period,” says R. Ramakumar, NABARD Chair Professor at the Tata Institute of Social Sciences, who backs India’s decision to quit RCEP, saying that between 2011 and 2019. “India’s trade deficit with ASEAN rose from about $ 5 billion to about $ 22 billion,” [now pegged at $24 billion, according to government reports in August], ”He says. In the last decade, our trade deficit with Japan rose from $ 4 billion to about $ 8 billion, he points out, and with South Korea from about $ 8 billion to $ 12 billion.

The Hindu In Focus podcast | Was India right to leave the RCEP trade deal?

Why are trade deficits growing?

Other experts contest the FTA argument on two accounts. In a 2019 paper entitled ‘India’s Trade Agreements and the Future of Indian Trade Policy’, Johns Hopkins University professor, Pravin Krishna, explained that while deficits have increased for India in all foreign trade, India’s FTAs ​​or PTAs (Preferential Trade Agreements) do not account for a bigger chunk of the trade deficit than they did before. “Trade deficits with India’s bilateral partners accounted for 12.6% of the overall trade deficit in the year 2007. In 2017, they accounted for a considerably smaller 7.5%,” said the paper. Another explanation for the growing trade deficits comes from the downturn in India’s GDP since 2016, and the decline in manufacturing. In addition, says Amitendu Palit, senior research fellow at the National University of Singapore’s Institute of South Asian Studies, FTAs ​​are not the only reason imports from RCEP countries, especially China, are rising. “If one looks at China, 75% of the inputs from China on machinery, bulk drugs, chemicals, and other equipment are [goods] that are not available in India in sufficient amounts or at competitive prices. There is this view that imports from China would have flooded had India entered RCEP, but haven’t they already flooded the country? ” Mr. Palit asks.

How has the COVID-19 pandemic changed the debate?

The COVID-19 pandemic has left the global economy in a state of disarray. For the first time in 60 years, nearly every country in the RCEP grouping is facing a recession. The fears over individual losses, combined with the trend worldwide against globalization, are driving countries to form smaller trading coalitions outside of the World Trade Organization. In addition, travel between countries is being restricted by the spread of the virus, further promoting local or regional trade and travel bubbles. As the world’s second largest economy and one of the only ones to show GDP growth this year, China offers potential investment to RCEP countries, and that was another incentive for them to conclude the agreement on schedule, without delaying it to a time after the pandemic . On the other hand, India’s tensions with China over the PLA’s (People’s Liberation Army) aggressions at the Line of Actual Control this year, and the continued standoff between their armies have hardened its position on RCEP, and officials say events during the pandemic have only “Vindicated” India’s stand on staying out of the grouping.

Who wants India in?

Several RCEP countries still hope India will reconsider its decision of staying out. For Japan and Australia, the large size of the Indian economy and its negotiating heft would pose a valuable counterpoint to China within the grouping. It is for this reason that Japan led the drafting of the special statement on India, which would waive the 18-month mandatory waiting period if India applied formally to rejoin the group. For ASEAN countries that led the RCEP negotiations, India’s presence would provide weight to the centrality of the ASEAN grouping in the region. The importance of drawing India into the agreement was underlined when leaders of all ten ASEAN countries traveled to India as the Republic Day chief guests in 2018. For China, too, having India within the RCEP tent would not just open up India’s market access for Beijing , but would also provide one more forum on which to cooperate that does not include the United States (US), its biggest rival.

Comment | India’s no to RCEP could still be a no

Finally, there is the question of how the Quad (Quadrilateral Security Dialogue) would operate on economic issues, particularly in terms of securing supply chains, with the US walking out of the Comprehensive and Progressive Agreement for Trans-Pacific Partnership (CPTPP), and India exiting the RCEP.

India’s concerns over Chinese goods flooding the Indian market through other markets under the RCEP, without clear guidelines on rules of origin, find clear mention and an entire chapter devoted to it in the final RCEP text of 20 chapters, despite the fact that India is no longer in the grouping. There is also a chapter on allowing trade in services (Chapter 8), particularly financial, telecommunications and professional services, which was another key demand by India during the seven years that it continued to negotiate the RCEP. In addition, there is a summary of objections by various RCEP members to different parts of the agreement, which are expected to be resolved in the next few years as the treaty goes through ratification processes across the region. Even so, the Indian government says there is no rethinking the decision to stay out of the RCEP. India has skipped every meeting of the grouping in the past year.

The next big question is whether India will accept the invitation from RCEP countries to be an “observer” at their meetings. When asked this week, Ministry of External Affairs spokesperson Anurag Srivastava declined a direct reply. “Our position regarding joining RCEP is very well-known. We conveyed our position not to join RCEP as some of the important issues of core interest remain uncertain, ”he said. On November 16, External Affairs Minister S. Jaishankar had said the “mantra of an open and globalized economy” was used to justify unfair trade and production practices against India. “The effect of past trade agreements has been to de-industrialise some sectors. The consequences of future ones would lock us into global commitments, many of them not to our advantage, ”he had said. Without mentioning RCEP directly, the Minister was saying that India does not plan to use the special window at present, and rather than suffer trade deficits that had been the outcome of various FTAs ​​India had signed, India would prefer to go it alone, or as he put it, have “the courage to think through the problem for ourselves”.

(With inputs from Ananth Krishnan)

Over 50% of adults don’t know how to protect themselves from cybercrime: survey

The findings come in the backdrop of 59% of adults in India becoming victims of cybercrime in the past 12 months. About 52% of adults...
Read more

RBI sets up committee to review working of ARCs

The RBI on Monday set up a committee to undertake a comprehensive review of the working of asset reconstruction companies (ARCs) in...
Read more

Returns on my investments

Building a portfolio is a complex exercise, and it has to...
Read more
Bharat News