Top news of the day: Nitish Kumar returns as Bihar CM for 7th time in 20 years; Moderna says its vaccine is 94.5% effective in preventing COVID-19, and more 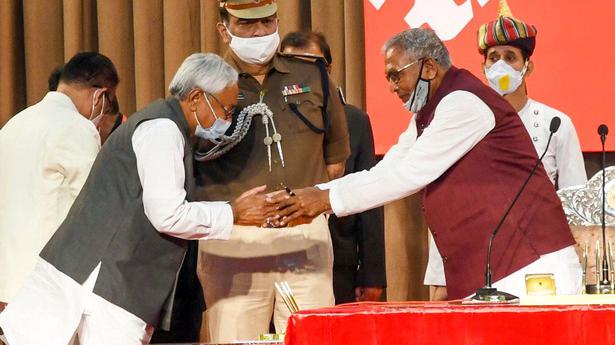 Nitish Kumar was on Monday sworn in as the Chief Minister of Bihar for the seventh time in two decades, in presence of top leaders of the NDA including Union Home Minister Amit Shah and BJP national president Jagat Prakash Nadda. Mr. Kumar, who heads the JD(U), was administered the oath of office at Raj Bhavan by Governor Phagu Chauhan, a day after he staked claim for the formation of a new government in the state, armed with unanimous support of all legislators of the NDA despite his party’s plummeted tally.

For the second time this month, there’s promising news from a COVID-19 vaccine candidate: Moderna said on Monday its shots provide strong protection, a dash of hope against the grim backdrop of coronavirus surges in the US and around the world.

About a fifth (21.84%) of new COVID-19 fatalities in the past 24 hours has been reported from Delhi (95 deaths), overtaking Maharashtra. Delhi also has recorded the second largest surge in new cases and largest number of recoveries (7,606), said data released by the Union Health Ministry here on Monday.

It has been a good month for the BJP so far, with the National Democratic Alliance (NDA) moving past the majority line in the Bihar Assembly; the party far ahead of its ally, the Janata Dal (U); and grabbing the House Speaker’s position as well. But what has really made this an important month for the BJP in the State is that it has been given, through the difference in its relative strength vis a vis the JD(U), the opportunity to make changes in the party organisation and even taking bold steps in broadening its social coalition, over and above that of being a party identified with upper castes.

The Supreme Court on Monday sought a response from the Centre, the Uttar Pradesh government and its police chief on a plea made by the Kerala Union of Working Journalists (KUWJ) for the release of its secretary Siddique Kappan.

Prime Minister Narendra Modi on Monday called upon people to continue to support the local economy like they did on Diwali and urged seers to also spread the message of ‘vocal for local’. He also unveiled a statue of Jain seer Vijay Vallabh Surishwer on his 151th birth anniversary through video conference.

Twelve individuals, who took part in the Anti-Citizenship (Amendment) Act at Shaheen Bagh, on Monday sought a review of the Supreme Court judgment which declared the demonstration of dissent as ‘unacceptable’ for blocking a public road.

Ethiopia’s Nobel Prize winning Prime Minister Abiy Ahmed started a military operation in the rebellious Tigray region in the country’s north earlier this month. Mr. Abiy has said it would be a limited campaign focusing on the Tigrayan People’s Liberation Front (TPLF), the militia-cum-political party that runs the region. However, almost two weeks into the conflict, Ethiopia risks falling into an ethnic civil war with regional implications.

Ever since it was announced last week that Virat Kohli would return to India midway through the tour to Australia on paternity leave, it has stolen the headlines across the cricketing globe. In an attempt to downplay Kohli’s absence, Australian fast bowler Pat Cummins, in a select media interaction on Monday, said Kohli’s absence from the last three Tests “might make a bit of a difference” but won’t be a deciding factor in the series.

The US deputy ambassador told the Security Council the U.S. has listened to warnings of the terrorist designation's humanitarian...
Read more
National

Rahul seeks public support for campaign in favour of farmers, against...

The Congress is observing the day as Kisan Adhikar Divas and will take out protest marches in all state capitals. Asking people to join...
Read more

The US deputy ambassador told the Security Council the U.S. has listened to warnings of the terrorist designation's humanitarian impact and will take measures...
Read more

U.S. investors will have to divest their stakes in Chinese companies on the military list by November this year. The U.S. government has blacklisted...
Read more