COVID-19 positive woman gives birth to healthy baby in UP 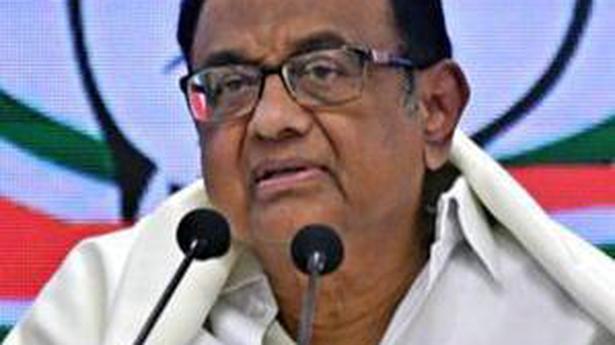 Several English newspapers have noted India would be “better off” by being part of RCEP, says ex-finance minister

Former Finance Minister P. Chidambaram on Tuesday said External Affairs Minister (EAM) S. Jaishankar’s views on trade agreements were similar to the language used in the 1970s and claimed that several English newspapers have noted that India would be “better off” by being a part of the regional trade bloc, the Regional Comprehensive Economic Partnership (RCEP).

Mr. Jaishankar, while addressing the Deccan Dialogue conference on Monday, had said India had allowed “subsidized products and unfair production advantages from abroad to prevail” in the name of having a globalized economy and that resulted in de-industrialisation of some sectors.

The EAM, however, did not directly refer to the RCEP, one of the largest trade blocs of 15-nations from the Asian-Pacific region, that was signed on Sunday.

Though India under the Manmohan Singh government was part of the initial dialogue, it chose to walk out of the negotiations last year.

“I must, however, express my dismay over the speech by Foreign Minister S. Jaishankar yesterday at the Deccan Dialogue when he railed against trade agreements and praised the virtues of protectionism. Mr. Jaishankar is speaking in the language and in the words that I heard in the 1970s and 1980s! ” Mr. Chidambaram said on twitter.

In a series of tweets, he said he ‘reserved’ the right to have a final view until the Congress takes a considered view on the issue.

“My guarded tweet yesterday on India not being member of RCEP has been noticed by many. Every English language newspaper that I read has carried an editorial today that India would be better off by being a part of RCEP. I would reserve a final view until the Congress party has taken a considered position on the issue. “

On Monday, the former Union Minister said there are pros and cons about joining the RCEP but “the debate has never taken place in Parliament or among the people or involving the opposition parties”.

Ministers Duraimurugan and R. Gandhi took stock of the COVID-19 situation in the district, asked for steps to improve oxygen supply and appealed to...
Read more
National

Though the incident took place on Wednesday, it came to light only after a video of the incident went viral on social media platforms. ...
Read more
Trending

The move ratchets up pressure on the union govt to pay the sum of $ 1.2 billion plus interest and costs that Cairn Energy...
Read more

The CBIC has asked field offices to clear all pending refunds of customs and drawback claims by the month-end. The Central Board of...
Read more

India's exports in April jumped almost threefold to $ 30.63 billion from $ 10.36 billion in the same month last year, according...
Read more

The government may finally notify the refund rates for taxes paid on exported goods by the end of this month, a senior trade official...
Read more
Bharat News