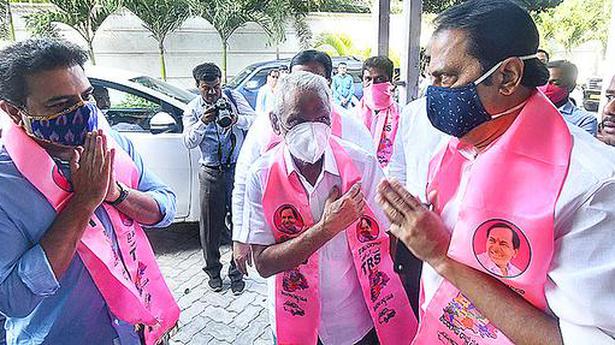 With the shocking defeat in the by-election to Dubbak Assembly constituency in Chief Minister’s home district Siddipet, the ruling TRS appears to be treading a very cautious path ahead of elections to GHMC, a few other urban local bodies and Graduates’ Constituencies in the Legislative Council. Although the party has put a brave front for public consumption after the Dubbak defeat, the attempt is being seen as a step to prevent further damage to the morale of the party rank and file gearing up to the elections lying ahead. Increase in wages of sanitation staff and 50% rebate given in the property tax for those paying tax up to ₹15,000 and ₹10,000 a year in GHMC and other ULBs, respectively, is also being seen as a measure to assuage the feelings of the poor and middle-class that was battered badly in the October rains and flood in the city as the sop of financial assistance did not heal the wounds much, a party insider said. One need not be surprised with more sops coming Hyderabadis way before the issuance of election notification.

As the GHMC elections are all set to be conducted soon, the most feared with them are the TRS sitting corporators as rumours are agog that nearly 30 corporators may not get renomination.

Party heads have already done the exercise as per the internal surveys and the corporators have got the message indirectly from their sources that they may not be favoured.

Several corporators feel the poor image of their MLAs is reflecting on them. “We rarely had freedom to take up developmental activities with Ministers and MLAs hogging the limelight in whatever was done. “The MLAs kept us away and the people’s perception is that we failed while the party heads worked,” said a corporator.

The sudden decision of government to waive off 50% property tax for residential units for this year just before the GHMC elections is being criticised by the opposition parties as an election sop.

The Congress and BJP leaders argue that the decision reflects the fear of the ruling party after the defeat in Dubbak by-polls.

If the government was concerned about people, it should actually scrap the present LRS or waive off all the charges to those who have applied for the scheme, is their argument.

Quite understandably, the TRS leaders are mum on the issue.

The Enforcement Directorate and the Central Bureau of Investigation should be sent to the borders to tackle terrorists and infiltration on the borders, Maharashtra’s...
Read more
National

Depression forms over Bay of Bengal, to intensify soon: IMD

A depression has formed over Bay of Bengal on Monday and it is likely to intensify further into a deep depression and bring...
Read more
National

Another storm could hit Tamil Nadu after Cyclone Nivar: IMD

The Enforcement Directorate and the Central Bureau of Investigation should be sent to the borders to tackle terrorists and infiltration on the borders, Maharashtra’s...
Read more

Depression forms over Bay of Bengal, to intensify soon: IMD

A depression has formed over Bay of Bengal on Monday and it is likely to intensify further into a deep depression and bring...
Read more

Another storm could hit Tamil Nadu after Cyclone Nivar: IMD

Another storm is expected to affect Tamil Nadu less than a week after Cyclone Nivar hit the southern state, the India Meteorological Department (IMD)...
Read more

After a ‘Covishield’ vaccine volunteer sued the Pune-based Serum Institute of India (SII) and the Oxford Group over ‘adverse reaction’ during the vaccine trial,...
Read more
Bharat News