Trump not conceding poll defeat is an embarrassment, says Biden 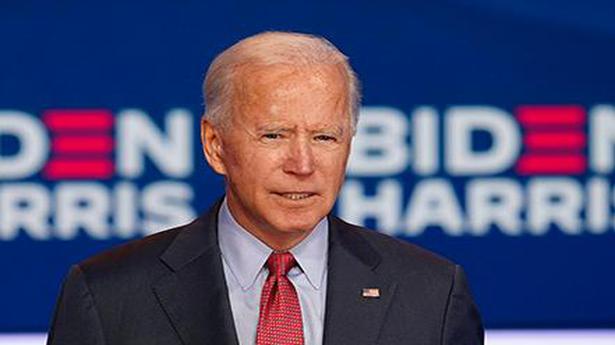 U.S. President Donald Trump not conceding defeat in the just-concluded election is an embarrassment, President-elect Joe Biden said Tuesday, asserting that his transition plans have remained unaffected by this and he has started talking to world leaders.

“I just think it’s an embarrassment quite frankly…. It will not help the president’s legacy…. I know from my discussions with foreign leaders thus far that they are hopeful that the United States’ democratic institutions are viewed once again as being strong and enduring,” Mr. Biden told reporters in Wilmington, Delaware.

Responding to questions from reporters on Mr. Trump not conceding the race, Mr. Biden hoped that at the end it’s all going to come to fruition on January 20th.

“Between now and then my hope and expectation is that the American people do know and do understand that there has been a transition. Even among Republicans…who voted for the president, I understand the sense of loss. I get that, he said.

Mr. Biden hoped that those who voted for him and those for Mr.Trump would come together. “A significantly smaller number, but a lot voted for him — I think they understand that we have to come together. I think they’re ready to unite and I believe we can pull the country out of this bitter politics that we’ve seen for the last five, six and seven years, he said.

The President-elect said that he has already begun the transition. We are well underway. The ability for the administration in any way by failure to recognize our win does not change the dynamic at all in what we’re able to do, he said, noting that a day earlier he has announced his COVID-19 advisory board.

“We are moving along in a consistent manner, putting together our administration in the White House and reviewing who we’re going to pick for the cabinet positions…and nothing is going to stop that. I’m confident that the fact that they are not willing to acknowledge we won at this point is not of much consequence in our planning and what we’re able to do between now and January 20th, he asserted.

Referring to the congratulatory calls that he has had so far with six world leaders, he said that the response has been very fulsome, energetic, and they are all looking forward to being able to, from Great Britain to France to Germany to Canada, et cetera, and Ireland.

“I feel good about the ability to…I said when we announced that the next president is going to inherit a divided country and a world in disarray. The reception and welcome we’ve gotten around the world from our allies and our friends has been real and I have a number of other calls to return and so I feel confident that we’re going to be able to put the American back in a place of respect that it had before, he said.

Responding to a question, Mr. Biden said that access to classified information is useful, but he is not in a position to make any decisions on those issues anyway.

“As I said, one president at a time and he will be president until January 20th. It would be nice to have it, but it’s not critical. We are just going to proceed the way we have. We’re going to do exactly what we’d be doing if he had conceded and said we have won, which we have, and so there’s nothing really changing,” he said.

Agriculture Minister B.C. Patil to release it to the market tomorrow A cooperative society in Karkala in Udupi district...
Read more
National

T.N. gets award for oil and gas conservation

The Hindu Explains | Why are Democrats and Republicans opposed to the provision under the Communications Decency Act?

The story so far: In the U.S., Section 230 of the Communications Decency Act (CDA) regulates online publication and liability. Specifically, the 1996 law...
Read more

The U.S. has termed the start-up a ‘Communist Chinese military company’ On January 14, the U.S. Department of Defense released its latest list of what...
Read more

National Guard | Boots on the ground

Given the ferocity of the pro-Donald Trump mob that attacked the U.S. Capitol building on January 6, and intelligence from the Federal Bureau of...
Read more

Uganda’s Yoweri Museveni has won a sixth term in office, extending his 35-year rule after an election which took place under heavy security and...
Read more
Bharat News