Trump wins Alaska, his electoral college tally goes up to 217 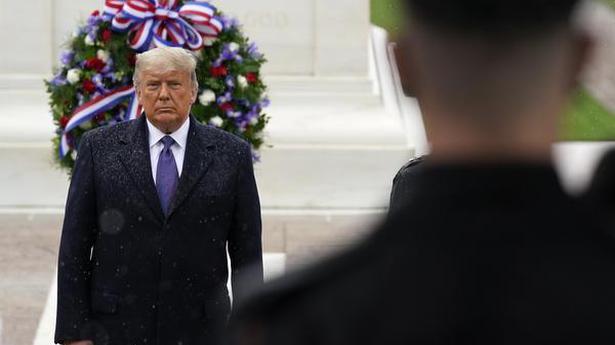 Mr. Biden has already been declared winner of the November 3 presidential election.

US President Donald Trump has won the closely-fought presidential election in the state of Alaska, winning three electoral college votes and taking his tally to 217.

The Republican Party has also retained the Senate seat from Alaska, giving it 50 seats in the 100-member United States Senate.

When the election was called in Alaska, Mr. Trump had received 56.9% of the total votes counted and President-elect Joe Biden from the Democratic Party with 39.1%.

Click here to read our live updates of the U.S. election results

With this, Mr. Trump’s tally of electoral college votes has increased to 217, as per the count maintained by The New York Times.

Mr. Biden has already been declared winner of the November 3 presidential election with 279 of the 538 electoral college votes. Mr. Trump has refused to concede and has filed lawsuits in multiple states, challenging election results.

“President Trump and Senate Republicans win Alaska, overwhelmingly and by a massive 20 point spread!” Ivanka Trump, daughter of Mr. Trump and a presidential advisor, said in a tweet.

With the district running out of ICU and oxygen-supported beds, distressing scenes ensued at the Anantapur GGH as tens...
Read more
National

Observing that the State is facing a grave situation due to the COVID-19 surge, the High Court of Karnataka on Wednesday directed the Central...
Read more
Business

We have hand-picked 50 mutual funds for your portfolio that have jumped through hoops of good returns,...
Read more
Entertainment

Tom Hiddleston-starrer Loki gets a new release date, will stream on...

No immediate word on condition of victims. Police arrested a man who they said is suspected of stabbing two Asian-American women without warning on Tuesday...
Read more

No immediate word on condition of victims. Police arrested a man who they said is suspected of stabbing two Asian-American women without warning on Tuesday...
Read more

Cannot have bloodshed on border and good relationship in other domains, says Jaishankar China on Wednesday expressed “concern and regret” at India’s move to...
Read more

Facebook’s oversight board upholds Trump’s suspension from the platform

While uploading the suspension, the board faulted Facebook for the way it made the decision. Former U.S. President Donald Trump won’t return to Facebook —...
Read more

The ETP is said to create immediate opportunities for British businesses in India across industries including food and drink, life sciences and the service...
Read more
Bharat News