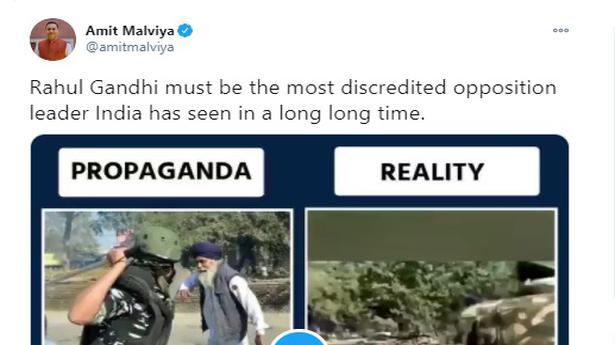 Microblogging website Twitter has flagged a tweet related to the ongoing protests by farmers against the recent agriculture laws put out by Amit Malviya, who heads the information and technology department for the BJP, as ‘manipulated media.’

According to Twitter’s policy, a tweet may be labelled as ‘manipulated,’ or removed in some cases, if the company has a reason to believe that the content, or the context in which the content is presented, is “significantly and deceptively altered or manipulated.”

To assess such media, it looks at whether editing has been done in a manner that fundamentally alters the content composition, if it has been shared in a deceptive manner, and if it is likely to impact public safety or cause harm.

The U.S.-headquartered firm either uses its own technology to determine if contents have been significantly and deceptively altered or fabricated, or receives reports through partnerships with third parties.

On November 28, Mr. Malviya, in response to a tweet by former Congress president Rahul Gandhi showing a policeman swinging a baton at an elderly farmer during a lathi-charge at a recent protest, tweeted, “Rahul Gandhi must be the most discredited opposition leader India has seen in a long long time.”

Along with the text, he shared a video with the heading “propaganda vs. reality” that showed that while the cop did swing the baton, the farmer escaped its blow.

Mr. Malviya’s tweet was fact-checked by AltNews as well as BoomLive.

Meanwhile, Boomlive got in touch with the farmer in the video who said he did suffer injuries to his forearm, back and calf muscle.

The CBI has booked two Superintendents of the Customs Department, earlier posted with the Air Intelligence Unit at the international airport in Ahmedabad, for...
Read more
Bharat News