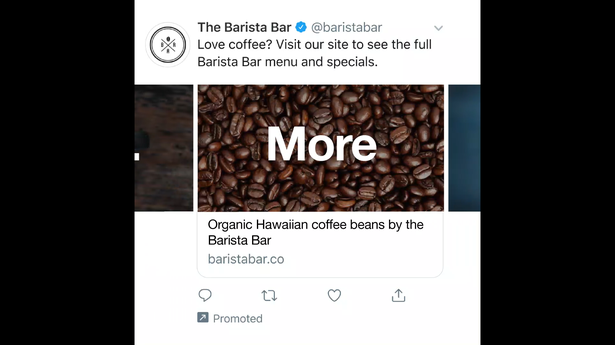 Twitter tested the Carousel ads format in 2016, which allows advertisers to attach multiple images or videos to a single ad tweet.

Twitter introduced on Wednesday a new and updated version of its Carousel ads feature for advertisers to help companies drive consumer engagement and increase app installs.

Carousel cards are horizontally swipeable images that can be used to promote direct advertising. Advertisers can add up to six carousel cards in a single ad to showcase the product and highlight its features. Video carousels enable video ads.

Currently, a single carousel ad can either contain only images or videos; not both. The format is available via Ads Manager and through Twitter’s API.

In beta testing, website carousel ads saw a 15% increase in click-through rate, while app carousels witnessed a 24% increase in installs per impression relative to the single-ad format, Twitter stated.

"Israeli planes and troops on the ground are carrying out an attack in the Gaza Strip," the army said in a brief message. Israel...
Read more
Sport

Liverpool wins 4-2 against Man United in late push for Champions...

After anti-ownership protesters got into the ground and onto the pitch 11 days ago, further demonstrations could not stop Thursday’s Premier League fixture from...
Read more
Business

India's Union Budget 2021 made changes in the provisions relating to depreciation on goodwill, which is an important factor for stakeholders undertaking...
Read more
World

"Israeli planes and troops on the ground are carrying out an attack in the Gaza Strip," the army said in a brief message. Israel...
Read more

The hostilities escalated despite intense mediation efforts by Egyptian negotiators who held in-person talks with both sides. At least three rockets were fired Thursday...
Read more

However, as per rules, Mr. Oli is required to win the vote of confidence within 30 days from the date of the appointment. K...
Read more
Bharat News