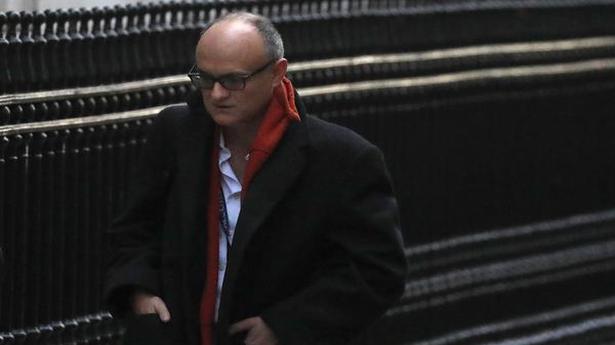 Dominic Cummings, one of the most influential and high-profile aides of British Prime Minister Boris Johnson, has left Downing Street after a power struggle that has rocked the U.K .government, the media reports said on Saturday.

The dramatic events come ahead of crucial Brexit talks with Brussels with the transition period deadline of December 31 looming.

According to BBC, Mr. Cummings, 48, has left Downing Street after internal battles over his role as Johnson’s chief adviser.

He will continue to work from home, on issues such as mass coronavirus testing, until the middle of December, the report said.

The Prime Minister is said to want to “clear the air and move on”, it said.

Mr. Cummings was initially said to be leaving by Christmas next month.

The largely behind-the-scenes influencer found himself in the limelight earlier this year when he was accused of breaching lockdown rules by making a trip from London to the north-east of England, at a time when he feared he could have contracted coronavirus.

There were resounding calls for him to step down or be sacked but he instead hosted a press conference to deny allegations of wrongdoing.

In a blog post in January, Mr. Cummings had hinted that he planned to leave his role by the end of the year, saying he hoped to make himself “largely redundant” by then. However, according to sources being quoted across the UK media, the exit of one of his own close allies in Downing Street – Cain as the No. 10 Director of Communications – had precipitated his exit plans.

Mr. Cummings and Mr. Cain both worked with Johnson as part of the Vote Leave campaign during the 2016 European Union (EU) referendum and are seen as instrumental to the Brexit outcome.

They are widely regarded to have since led a Vote Leave faction of colleagues in Number 10 and other parts of government.

Mr. Cain, 29, had announced he would step down as Mr. Johnson’s top media aide on Wednesday night after ministers and advisers, including Mr. Johnson’s fiancee Carrie Symonds, are said to have protested over his planned promotion to Chief of Staff.

Mr. Symonds, a former head of communications for the ruling Conservative Party, is believed to be unhappy with the influence of some of her husband-to-be’s closest aides. Johnson is looking to fill the post of Chief of Staff as part of a wider reorganisation at the very top of his government structure.

However, several members of Parliament from within the Conservative Party have expressed dismay at the internal wrangling of No. 10 spilling out into the public domain.

It comes at a time of growing unease on the Tory benches at the government’s handling of the pandemic and the economic damage being caused by the current lockdown in England.

But Mr. Johnson’s official spokesperson, James Slack, who will replace Mr. Cain when he departs in the New Year, tried to diminish the reports of any bitter power struggles behind closed doors.

“You’ve seen from the Prime Minister this week that he’s absolutely focused on taking all the steps that are required to equip the country to beat coronavirus,” he said.

The government has issued new guidelines for COVID-19 vaccination, prioritising the vaccination of those who are due for receiving the second dose of vaccine.Accordingly,...
Read more

Hamas, which had been expected to perform well in the May 22 elections, had earlier said that voting in east Jerusalem should take place...
Read more

An Interpol-led global operation, in which Indian enforcement agencies also participated, has resulted in the identification of thousands of suspects, companies and criminal networks...
Read more
Bharat News