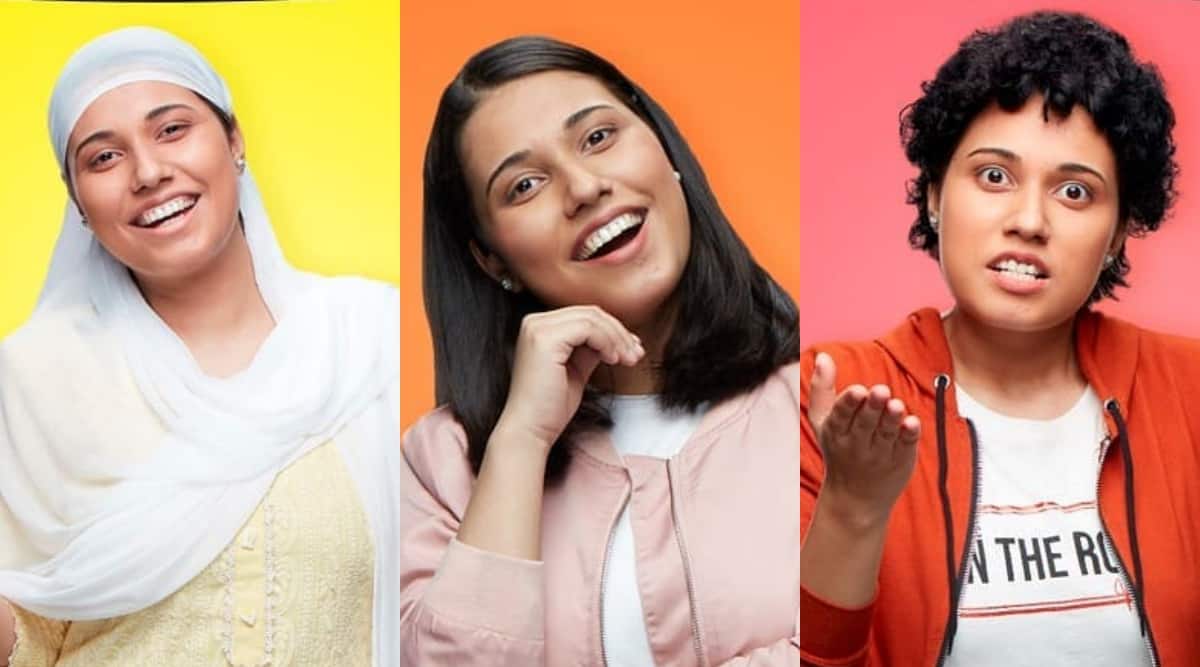 Uncommon Sense with Saloni is streaming on SonyLIV. (Photo: SonyLIV/Instagram)

Saloni Gaur, a Delhi University student and a comedian, is a popular face on social media. Her alter-ego Nazma Aapi is famous for her videos on trending topics. Also, her mimicry of Bollywood actors Kangana Ranaut and Sonam Kapoor has caught the attention of many. She enjoys a fan following of over 5 lakh on Instagram and over 2 lakh on Twitter. Within a year of being a social media star, the 20-year-old has bagged a show titled Uncommon Sense with Saloni, streaming on SonyLIV.

Recently, in an interview with indianexpress.com, the comedian shared how she got the gig. She also opened up about her process of choosing topics for her social media videos and the recognition that has come with her work.

Why did the ‘Instagram ki Nazma’ decide to become ‘Sony ki Saloni’?

People at Sony came to me and they said they are planning to make something with me. They gave me the liberty to choose whatever I wanted to do. They just wanted something similar to what I do on social media, but on a grand level. They didn’t want me to lose my USP, which is doing satirical comedy through various characters. This show has a very middle-class feel. We are seeing everything from a middle-class perspective. So that’s how this happened.

Was there some change in your working process with the change of platform?

My videos are just piece to camera. I keep my phone in front of me and start speaking. But now there are certain people for everything, like a director and a writer. I was my own director until now. Now there are people to guide me, to tell me how to speak and to look into which camera. Everything is completely different. The first day when I went on the set, I was shocked to see how a movie or a sketch is made. It’s quite fascinating how they create an entire room just from a wall or how a sofa looks pretty on screen, but behind the camera, there’s all trash around the sofa. I remember visiting a set where a small space had a kitchen, a bathroom, and a living room too. So, it’s nice to discover how the art department works and designs a set.

How much say did you have in the writing process of the show?

I haven’t written anything in Uncommon Sense with Saloni. I just listen to the narrations. We had a team of writers and all of them are my friends only. We have known each other for a very long time and their work is quite amazing.

After working in two different mediums, which one do you find more enjoyable?

I prefer both but obviously, it’s easier to perform what I have written since I remember the lines better. But when they write for me, they make it a point to match the writing with my style. They make it appear as if Saloni has only written the script.

You got more popular during the lockdown. Do you think this lockdown came as a blessing for you as you got more attention during this period?

Fortunately, I am lucky that people started watching my videos and I saw a complete boom on my social media accounts during the lockdown. Some Bollywood celebrities also shared my videos. Though, now I do not jump and dance as I did earlier when a celebrity shared my video. So, it has been quite a journey from 100-200 followers to 5 lakh followers now. I am enjoying this fame. However, I used to think there will be a day when people will recognise me when I will walk on the streets, but that never happened because of the lockdown. Other than that, everything is good.

For your social media videos, how do you decide the topics? Since we are living in times where offending someone is quite easy, are you conscious about the subject of your pieces?

My USP is performing on current topics. People tend to get offended, be it any video. Even if I am talking about something personal to me, they would still get offended. I learnt this quite early that people will get offended no matter what, so I don’t censor myself. What I keep in mind is to not take any names, but through my dialogues, people realise who is being talked about.

Have you ever been at the receiving end of social media trolls? If yes, how did you deal with them?

Once I was trolled heavily and I started introspecting where did I go wrong. But then my brother told me, ‘these are just keyboard noises, it’s their job to do this. They are even paid for it, so you don’t have to worry about them. If they are saying anything they want, you also say anything you want.’ So, I don’t give enough attention to them. I laugh at their creativity in bringing the bad out of the good.

How do you nail the accent of celebrities like Sonam Kapoor and Kangana Ranaut?

Kangana’s accent comes instantly to me. I have been impersonating her for almost 7-8 years. Now, I can wake up from sleep and imitate her. But Sonam’s mimicry is tough for me. People say I sound like her, but it doesn’t come naturally to me. Her accent is quite specific and particular. If you tell me to do it right now, I won’t be able to do it.

Do you take feedback from your friends and family before uploading a video?

Sometimes I send them to my brother to check if the jokes are landing well or not. Other than that, I don’t take approval from anyone.

There is no doubt about how much the Hindi film industry loves the Maldives. After umpteen number of celebs...
Read more
National

Man says no to SC query if he would marry girl...

We are not forcing you, says Bench. I am already married, he says. The Supreme Court on Monday asked a government employee whether he...
Read more
National

The automated system, inspired by Japan’s ‘Manga’ comics, will help professionals develop their own books from videos, movies, TV shows or cartoons (Subscribe to our...
Read more

There is no doubt about how much the Hindi film industry loves the Maldives. After umpteen number of celebs headed to the island nation...
Read more

WandaVision is currently the hottest, most talked about show. It has also single-handedly revitalised the Marvel Cinematic Universe for many. The latest episode, titled...
Read more

Keerthy Suresh’s film Good Luck Sakhi is all set for a grand release on June 3. Directed by Nagesh Kukunoor, the film will have...
Read more
Bharat News