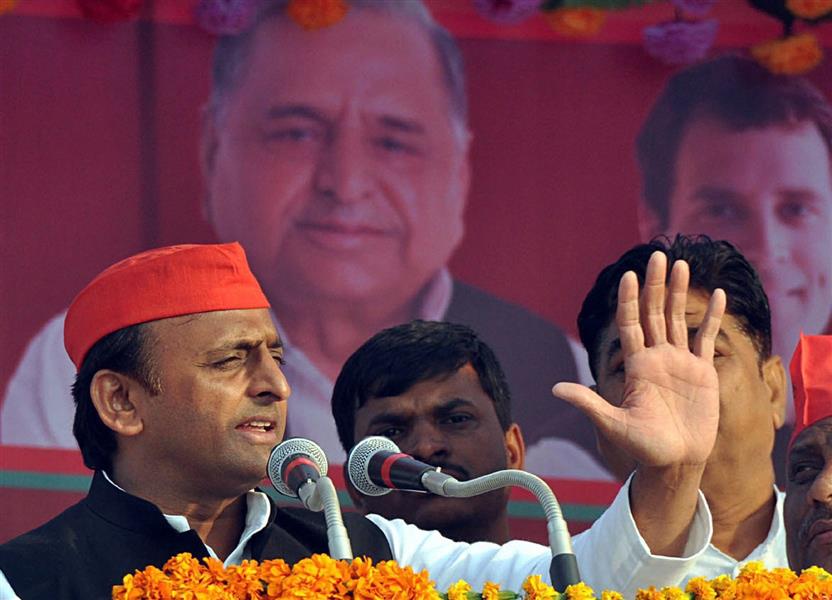 Hinting at a possible electoral tie-up with his estranged uncle’s Pragatisheel Samajwadi Party for the Uttar Pradesh Assembly polls, Samajwadi Party chief Akhilesh Yadav on Saturday said Shivpal Yadav will be given a cabinet berth if his party forms the government in the state.

However, he made it clear that the Samajwadi Party (SP) will not enter into any electoral alliance with the Mayawati-led Bahujan Samaj Party (BSP).

“Adjustment will be done with smaller parties, but there will be no alliance with larger parties,” Akhilesh Yadav told reporters here.

To a question whether the SP will form an electoral alliance with his uncle Shivpal Yadav’s Pragatisheel Samajwadi Party, he said, “We will adjust that party too. Jaswantnagar is his (Shivpal Yadav’s) seat and the Samajwadi Party vacated the seat for him. In the coming times, we will make their leader a cabinet minister, and what other adjustment is needed?”

Legislative Assembly elections in Uttar Pradesh are scheduled in February-March 2022.

Shivpal Yadav, the estranged uncle of Akhilesh Yadav, was elected from the Jaswantnagar assembly constituency in the 2017 state elections.

He later floated a new political party, Pragatisheel Samajwadi Party (Lohia), and contested the 2019 Lok Sabha elections on its symbol from Firozabad.

Accusing the BJP of using “deceit” for defeating the ‘Mahagathbandhan’ (led by the Rashtriya Janata Dal) in the recently concluded Bihar assembly elections, Akhilesh Yadav said, “The maximum public support was seen at the Mahagathbandhan rallies and all the surveys hinted towards a historic victory for it. But, when the EVMs were opened for the counting of votes, the results were stopped midway and the victory certificates were handed to someone else.”

When asked about the performance of the SP in the recently held bypolls to seven assembly seats in UP, Akhilesh Yadav said, “When the elections are contested by the election officers, superintendents of police, additional district magistrates, SHOs and police jawans, who will win then.”

“The BJP was not contesting the bypolls but the officials of its government,” he added.

The SP chief hit out at the BJP government, saying corruption and injustice have become rampant in the state.

“If someone is insulting people and giving them problems, they will overthrow that government as and when they will get an opportunity,” he said.

A number of leaders and workers from the Congress and the BSP joined the SP in the presence of Akhilesh Yadav on the occasion.

The joining of the leaders from other parties will strengthen the SP, Akhilesh Yadav said. PTI