US state of Georgia announces hand recount of votes 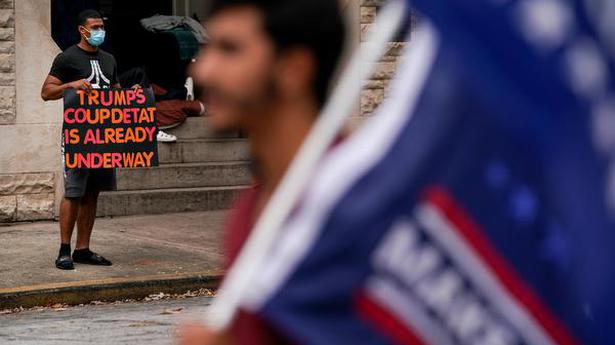 Georgia has 16 electoral college votes. Mr. Trump has alleged there has been massive voter fraud and electoral malpractice.

Georgia will conduct a manual hand recount of millions of ballots cast in the battleground state where President-elect Joe Biden is leading by more than 14,000 votes over President Donald Trump, who has not conceded in the US presidential race, and instead made unfounded claims about widespread voter fraud and electoral malpractice.

Georgia’s Secretary of State Brad Raffensperger, who is a Republican, said on Wednesday the state will recount presidential election results in each of 159 counties by hand due to the close margin.

“With the margin being so close, it will require a full by-hand recount in each county, Raffensperger told reporters at a news conference in Atlanta.

He said such a decision had been made because of the “national significance” of the outcome of the election results in the state.

Also read: Trump is not conceding. What’s next?

“It will be a heavy lift. This will help build confidence. It will be an audit, a recount and a recanvass all at once. We have all worked hard to bring fair and accurate counts to assure that the will of the voters is reflected in the final count, he said, adding that observers from both the political parties would be present during the hand recount.”

“The hand recount of votes, however, will be only for the presidential election,” he said.

Georgia has 16 electoral college votes. Mr. Trump has alleged there has been massive voter fraud and electoral malpractice.

State officials, according to The New York Times, have said that there has been no such evidence so far.

As of Wednesday, President-elect Biden had 279 of the 538 electoral college votes, with 270 being the halfway mark.

Click here to read our live updates of the U.S. election results

Biden has enough electoral votes to be the president even without Georgia, the report said.

On Wednesday, Biden was up by less than 0.3 per cent of the nearly 5 million votes cast in Georgia. On Saturday, he was declared winner of the presidential election as some states continued to count votes, largely because his margins in several states are too wide for Trump to overcome.

Georgia’s presidential race has not yet been called because of the close result, but Biden appears poised to take the state’s 16 electoral votes.

Raffensperger’s announcement comes as he has faced pressure from President Trump’s campaign for a recount, calls from fellow Georgia Republicans to resign and accusations of mismanaging the election process.

Raffensperger said he expects the recount to be done in time for Georgia’s certification of the presidential results, which has a November 20 deadline.

He said once the results are certified on November 20, a candidate within the 0.5 per cent margin will still be able to request a “recount,” but that it would be a “scanned recount” done by machines.

Trump campaign on Wednesday celebrated the recount decision from the Georgia secretary of state as a victory for “integrity” and “transparency.”

The Hindu Explains | Why are questions being raised about the viability of America’s electoral system?

“This is an important first step in the process to ensure that the election was fair and that every legal vote was counted,” Trump campaign communications director Tim Murtaugh was quoted as saying by the CNN.

Along with Georgia, Trump has filed lawsuits in the states of Pennsylvania, Michigan, Nevada, Arizona and sought recounting of votes in Wisconsin.

Trump has declined to concede the closely-fought November 3 presidential race to Democrat Biden and is mounting legal fights in several states, but there has been no evidence of voter irregularities or widespread fraud in the election – billed as one of the most divisive and bitter in recent American history.

The president-elect was asked by a reporter on Tuesday what he thought of President Trump’s refusal to acknowledge defeat.

“I just think it’s an embarrassment, quite frankly,” Biden said in his hometown in Wilmington, Delaware.

“The only thing that, how can I say this tactfully, I think it will not help the president’s legacy,” Biden, 77, said.

Share
Facebook
Twitter
Pinterest
VK
WhatsApp
Previous articleNikhil Dwivedi says he turned to production as he ‘was not offered good work’, talks about returning to acting with Scam 1992
Next articleSunil Chhetri gearing up for ISL in earnest, says staying in bubble “isn’t easy”

27 districts report fewer than 10 cases each in Tamil Nadu

The application supports end-to-end secure voice, text and video-calling services for Android platforms over the internet From April 1, the Indian Army is likely...
Read more
World

We will form a coalition government: Madhav Kumar Nepal

We are open for the formation of a coalition government as soon as the House of Representatives meets 12 days later, says the former...
Read more

China on Wednesday called the Japan-U.S. mutual security pact a product of the Cold War following U.S. criticism of the presence of Chinese coast...
Read more

Johnson & Johnson’s (J&J) single-dose vaccine protects against COVID-19, according to an analysis by U.S. regulators on Wednesday that sets the stage for a...
Read more
Bharat News