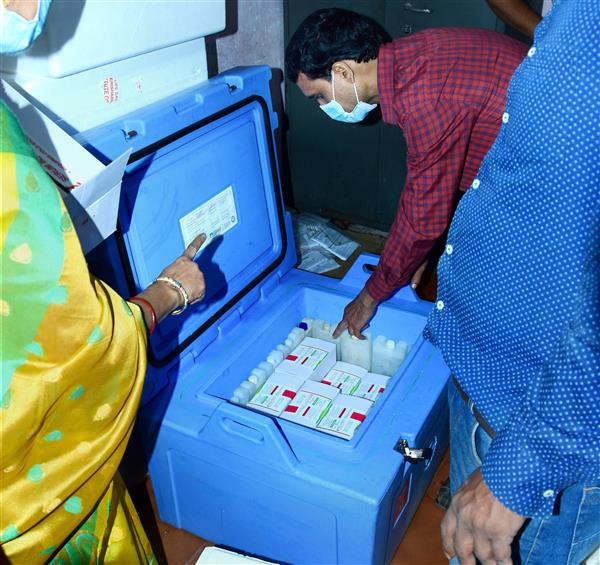 India’s drive against COVID-19 gathered momentum on Wednesday with planes carrying vaccines flying into airports across the country from where the precious cargo was dispatched to small cities and towns in readiness for the inoculation exercise beginning January 16.

From Assam to Goa and from Jammu and Kashmir to Kerala, the vaccines were carefully and swiftly transported to far corners of the country, a day after the first consignment of the Covishield vaccine from the Oxford/AstraZeneca stable rolled out of the Serum Institute of India manufacturing facility in Pune.

According to sources, 95 per cent of the 1.1 crore doses of Covishield vaccine purchased by the government have been delivered and shipped to nearly 60 consignee points across India in two days.

Of the 55 lakh doses of indigenously developed Covaxin of Hyderabad-based Bharat Biotech ordered by the Centre, the first tranche of 2.4 lakh doses have been dispatched to 12 states.

Covaxin has been sent to 12 sites, one each in Ganavaram, Guwahati, Patna, Delhi, Kurukshetra, Bengaluru, Pune, Bhubaneswar, Jaipur, Chennai, Lucknow and Hyderabad, according to official sources.

The vaccines have been allocated to all states and UTs in proportion to their healthcare workers database, the Health Ministry said.

On Tuesday, consignments were sent from Pune to 13 cities including Delhi.

As the vials began reaching their destinations, in readiness for the pan-India vaccination drive that will be launched on Saturday, states firmed up their plans and fine-tuned logistical details.

In Delhi, where the drive will begin in 89 centres, Chief Minister Arvind Kejriwal said his AAP government will provide the vaccine free if the Centre fails to do so.

He said he has already appealed to the Centre as there are many people in the country who can’t afford the life-saving jab.

In accordance with the national priority list, the vaccine will be first given to healthcare and frontline workers. While Madhya Pradesh, Kerala, Rajasthan and Uttarakhand and Union territories of Puducherry and Jammu and Kashmir were among those to receive the first consignment of the vaccines on Wednesday, others like Maharashtra and West Bengal started their transportation to various districts.

A special vehicle carrying COVID-19 vaccines was held up and had to take a five-kilometer detour in West Bengal’s Purba Bardhaman district after the national highway was blocked by protesters led by state minister Siddiqullah Chowdhury who were agitating against the new farm laws, sources said.

The van, piloted by the West Bengal Police, was on its way to Bankura and Purulia to deliver the vaccines when it was stranded despite a ‘green corridor’ being arranged for its swift movement, they said.

Chowdhury, who is the state library services minister, said he was not aware of the movement of the vaccine van and cleared the road once it was brought to his notice, but by that time the vehicle had been already diverted.

The first consignment of about 94,000 doses of the Covishield vaccine reached the Madhya Pradesh capital on a scheduled flight from Mumbai, a state government official said.

From the airport, insulated vans of the health department transported the boxes—that signal India entering a decisive phase in its fight against the pandemic—to the State Vaccine Centre where Medical Education Minister Visvas Sarang inspected the arrangements. The doses will be dispatched to eight districts from Bhopal.

Kerala, too, received its first Covishield vaccine consignment on Wednesday morning on a Go Air flight that landed at Kochi. Another flight was expected to land in Thiruvananthapuram later in the day.

Sources in the National Health Mission sources said of the 4.33 lakh doses of the vaccine, 1,100 will be sent to Mahe, an enclave of Puducherry.

The vaccine will be stored in the regional vaccine centres at Kochi, Thiruvananthapuram and Kozhikode from where it will be distributed to 133 centres.

Giving details of the vaccination plans for Maharashtra, Health Minister Rajesh Tope said the state had already received 9.83 lakh doses of the total requirement of 17.5 lakh for the first phase.

Of these, 9.63 vials were from SII and 20,000 from Bharat Biotech, the state minister told reporters.

“We have to give the doses twice to a person in a gap of four weeks, hence 55 percent of the around eight lakh registered health workers will undergo vaccination as of now,” he said.

The Centre, he said, has asked the state to reduce the number of inoculation centres from 511 to 350, saying the government should focus on other emergencies as well.

Each vaccination session will cater to a maximum of 100 beneficiaries per day and the Union Health ministry said it has advised the states not to organise “unreasonable numbers of vaccination per site per day”.

“States have been advised to organise vaccination sessions taking into account 10 percent reserve/wastage doses and an average of 100 vaccinations per session each day.

“Therefore, any undue haste on the part of states to organise unreasonable numbers of vaccination per site per day is not advised,” the Union Ministry said.

It also said that states and UTs have also been advised to increase the number of vaccination session sites that would be operational every day in a progressive manner as the vaccination process stabilises and moves forward.

Health department staffers of the BMC brought the vaccines from neighbouring Pune under police security, it said. The civic body has created a centralised cold storage facility for vaccines in Kanjurmarg.

The towns of Aurangabad and Thane in the state got their share of the first doses too.

Around 18,000 health workers in the coastal state will be covered during the initial phase, another health official said.

The northeast state of Assam received its second consignment of COVID-19 vaccines when a cargo flight of a private airline carried 12,000 doses of Covaxin weighing around 78.5 kg,  from Hyderabad to Guwahati.

“The consignment was shipped by Bharat Biotech and handed over to state government officials within six minutes of its arrival,” said an Airports Authority of India spokesperson.

The first batch of 2.40 lakh vials of COVID-19 vaccine for Assam and Meghalaya had landed on Tuesday.

Guwahati’s LGBI Airport has been marked as the nodal point of distribution of vaccines for the northeast.

Assam and Tripura welcomed their first lot of Covishield doses.

SpiceJet said it had transported 3.5 tonnes of COVID-19 vaccines on Wednesday from Mumbai, Pune and Hyderabad to 11 cities.

GoAir said it was airlifting a total of 69,600 vials of the vaccine.

The Mumbai airport said that the standard operating procedures (SOPs) implemented by it in anticipation of the vaccine distribution saw the terminal register a cargo processing time of just seven minutes, right from goods acceptance to dispatch at the ramp, it added.

Besides, the airport has deployed a dedicated COVID-19 task force to reduce dwell time and facilitate advanced planning and collaboration between the airport and all stakeholders in this process, it said. — PTI

‘Modi thinks he can control the people by blackmailing State govt.; he is wrong’ The people of Tamil Nadu...
Read more
National