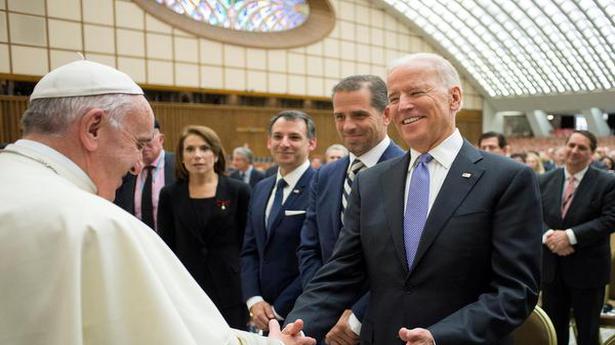 News of the call came even as some Catholic bishops in the U.S. decline to acknowledge Joe Biden’s victory and argue that the faithful should not back him because of his support for abortion rights.

It’s not exactly divine intervention, but even the Pope considers the U.S. presidential race over.

President-elect Joe Biden, a lifelong Roman Catholic, spoke to Pope Francis on Thursday, despite President Donald Trump refusing to concede. Trump claims — without evidence — that the election was stolen from him through massive but unspecified acts of fraud.

Also read: Trump is not conceding. What’s next?

Mr. Biden’s transition team said in a statement that the President-elect thanked Pope Francis for extending blessings and congratulations and noted his appreciation. He also saluted the pontiff’s leadership in promoting peace, reconciliation, and the common bonds of humanity around the world.

Mr. Biden said he hopes to work with Pope Francis on issues such as climate change, poverty and immigration.

No support in the U.S.

News of the call came even as some Catholic bishops in the U.S. decline to acknowledge Mr. Biden’s victory and argue that the faithful should not back him because of his support for abortion rights.

On Tuesday, for example, Bishop Joseph Strickland of Tyler, Texas, tweeted that Mr. Biden and Vice President-elect Kamala Harris support the slaughter of innocents at any point during pregnancy.

Mr. Biden has said he accepts church doctrine about abortion on a personal level, but does not want to impose that belief on everyone.

Mr. Biden has had several phone calls this week with foreign leaders, including British Prime Minister Boris Johnson, French President Emmanuel Macron and German Chancellor Angela Merkel. They have congratulated him on winning and consider the election settled.

Having the Pope on board, too, likely has special significance for Mr. Biden.

He is just the second Catholic to be elected president in U.S. history, and the first since John F Kennedy. Mr. Biden speaks frequently and openly about the importance of faith in his life and attends Mass near his home in Wilmington, Delaware, nearly every week.

No matter their faith, American politicians are often eager to meet with the Pope when travelling near Rome, though Pope Francis declined to meet with Mr. Trump’s Secretary of State, Mike Pompeo, in September, citing rules against such sit-downs during election periods. Pope Francis last visited the U.S. in 2015.

Known for advocating for openness on issues like gay rights, the environment and religious tolerance, Pope Francis has been embraced by some liberals as furthering their causes.

In its statement, the Biden transition team said the President-elect told the pontiff he would like to work together to further a shared belief in the dignity and equality of all humankind on issues such as caring for the marginalised and the poor, addressing the crisis of climate change, and welcoming and integrating immigrants .

The Vatican issued no statement confirming the call.

The U.S. ambassador to the Holy See is Callista Gingrich, whose husband, former House Speaker Newt Gingrich, has been among the vocal supporters of Mr. Trump as he refuses acknowledge Mr. Biden’s victory.

In the election, 50% of Catholic voters backed Mr. Trump and 49% favoured Mr. Biden, according to VoteCast, a survey of more than 110,000 voters nationwide conducted for The Associated Press by NORC at the University of Chicago.

A free super-speciality medical camp was organised for the benefit of retired workers, employees and officers of Singareni Collieries...
Read more
World

Donald Trump returns to the political spotlight on Sunday, determined to regain control of a Republican party that is out of power and pondering...
Read more
National

The son of the owner of a popular eatery Krishna Dhaba, who was shot at by militants 11 days ago in Srinagar, succumbed to...
Read more
National

The management of Ramagundam Fertilizers and Chemicals Limited announced on Sunday that its prestigious gas-based urea manufacturing plant at Ramagundam was in advanced stage...
Read more
Trending

Donald Trump returns to the political spotlight on Sunday, determined to regain control of a Republican party that is out of power and pondering...
Read more

Captain Tom, as he became known, inspired the U.K. during the first months of the coronavirus pandemic with his humble endeavour that raised almost...
Read more

Pakistan may resume import of cotton from India: report

Pakistan may allow cotton import from India through land route as prospects of gradual restoration of bilateral trade ties have brightened after the...
Read more

The official said the Indian fishermen were warned that they were in Pakistan's territorial waters and should turn away but did not heed the...
Read more
Bharat News