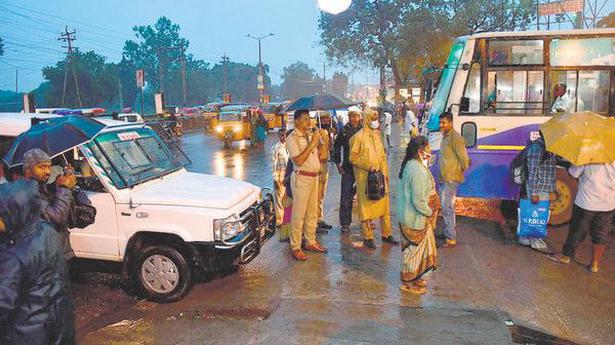 The Vellore district administration is gearing up to handle any emergency that may arise as Cyclone Nivar is likely to cross through Vellore, Arani and Katpadi after making landfall.

A. Shanmuga Sundaram, Collector, who inspected the arrangements said that the system was likely to maintain its cyclone intensity for about six hours and weaken gradually. Under its influence rainfall is expected at most/many places with heavy to very heavy downpour at a few places and isolated extremely heavy rain over Ranipet, Tiruvannamalai, Tirupathur and Vellore districts on November 26.

“Gale wind speed reaching 65-75 kmph gusting to 85 kmph is likely to prevail over Ranipet, Tiruvannamalai, Tirupattur, Vellore districts during early morning to forenoon on November 26,” the Collector said. This can cause damage to thatched houses, huts with possibility of roof tops being blown off, partial damage to power and communication lines, roads, flooding, uprooting of small trees and damage to crops.

Besides, a 24 hours control room has been set up. There are 13 relief centres identified and 3,000 members can be accommodated. Awareness about the cyclone is being created through autorickshaws. Wood cutting teams are ready with seven power saws. Diesel motors are also ready to drain out stagnant water in low-lying areas. “The flex banners and posts are being removed,” the Collector added.

Officials have been asked to watch the levels in the 14 PWD tanks which are already full. Highways gangs have been deputed to cut and remove the fallen trees, whenever required. “Public should not go out and families living in low-lying areas and vulnerable houses will be moved to schools or marriage halls. Catering services have been engaged to provide food, water, sanitizers, masks and emergency medicines for them,” the Collector said.

Each relief centre will be jointly managed by a doctor, village administrative officer and others. “The entire inflow of Mordhana reservoir will be let off into the Palar river, until further instructions. People living on the banks of the Palar river and its tributaries shall be vacated and taken to relief centres,” he explained.