All above 60 years of age, 45-plus with other illnesses to get COVID-19 vaccine from March 1 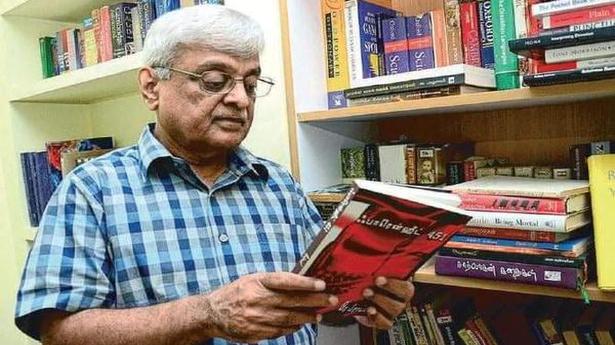 S. Ramakrishnan, veteran Tamil publisher, died at the Tamil Nadu Government Multi Super Speciality Hospital on the Omandurar Government Estate here on Tuesday. He was 75. His wife predeceased him many years ago.

He was treated at the hospital for COVID-19. As his condition deteriorated on Friday, the third edition of a work with he had associated nearly for 30 years — “Cre-A: Dictionary of Contemporary Tamil (Tamil–Tamil–English)” — was released at the hospital.

Mr. Ramakrishnan, whose mother tongue was Telugu, considered himself a Tamil as he was born and brought up in Chennai. A post-graduate in social work from Loyola College, Mr. Ramakrishnan, who had a brief stint in advertising, took to publishing when he was hardly 30. He founded Cre-A, a Tamil publishing firm, in 1974 with the objective of bringing out serious literature in Tamil.

The focus of the organisation widened as it published titles on environment, healthcare, agriculture, modern Western philosophy and technology. Since 1978, Cre-A brought out Tamil translations of literary works in Hindi, Bengali and Kannada, apart from publishing the works of leading Tamil writers and thinkers such as Mowni, Ashokamitran, Sa Kandasamy, Sundara Ramaswamy, Na. Muthuswamy and S.V. Rajadurai.

Mr. Ramakrishnan believed that irrespective of being acquainted with English or any other language, the Tamil people could internalise the ever-changing external reality only through their mother tongue. He would often say that experience and enjoyment one derived from reading the works of Jean Paul Sartre or Franz Kafka in Tamil would be entirely different from that of reading them in English. He also commissioned direct Tamil translations of works of German and French literary figures such as Kafka and Albert Camus, which are regarded as “important landmarks” of Tamil publishing.

It was the dictionary project on contemporary Tamil that enhanced the veteran publisher’s stature substantially in the literary world. The first edition of the dictionary was released in 1992, the Braille form of which became available in 2011. The project was prompted by his realisation that most people had learnt to live with the limited use of the Tamil vocabulary. To correct the situation, he laid the emphasis on strengthening the language with new skills, Mr. Ramakrishnan told The Hindu in May 1997.

He also played a key role in the formation of ‘MOZHI,’ a public trust, ‘Koothu-p-pattarai’,’ an avant-garde theatre group, and the Roja Muthiah Research Library.

Calling him “a pioneer in publishing critical works of Tamil literary writers of immense significance,” Indira Parthasarathy, leading Tamil writer-playwright-critic, refers to the collaborative project of Cre-A and the Harvard University in producing Iravatham Mahadevan’s Early Tamil Epigraphy: From the Earliest Times to Sixth Century A.D., and describes it as a “masterly production that matched the standards of Western academic publications.”

Dilip Kumar, Tamil writer and who worked at Cre-A for over 10 years, says Mr. Ramakrishnan had worked for erasing the perception, widely prevalent once, that Tamil literature meant studies of only classical works. He was keen on creating a body of meaningful Tamil readers so that serious works in modern Tamil literature could be supported and nourished. As a demonstration of his belief, he, at his office, had provided space for the display of works of art and serious books brought out by other publishers.

Amshan Kumar, Tamil writer-film maker, points out that Mr. Ramakrishnan, while producing books, preferred quality to quantity. Even as he brought out titles on modern and Western concepts, he followed the best practices of traditional Tamil publishing industry by working closely with authors.

Mr. Ramakrishnan was a part of the team that produced “Ka Sa Da Tha Pa Ra,” a literary magazine, which had a special focus to editing and enhancing the Tamil text, says Kannan Sundaram, publisher of Kalachuvadu.

Those above 45 with co-morbidities will also be eligible for COVID-19 vaccination at 10,000 government centres and 20,000 private...
Read more
Trending

Rukmini Made Gowda of the JD(S) was on Wednesday elected as the new Mayor of Mysuru while Congress party’s Anwar Baig was elected as...
Read more

The judicial working hours in Amravati, Yavatmal, Buldhana, Akola and Washim districts will be restricted to five hours a day — from 10.30 a.m....
Read more
Bharat News