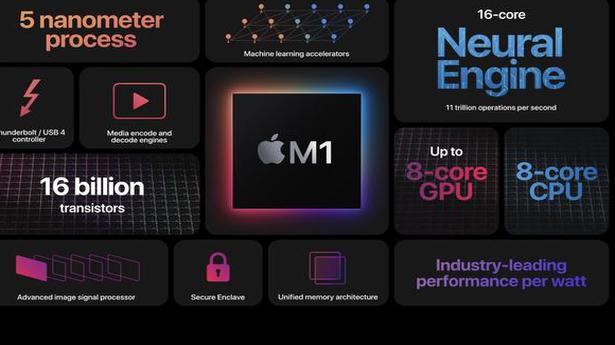 M1, says Apple, is the first personal computer chip built using cutting-edge 5-nanometer process technology, and comprises 16 billion transistors — the most the company has ever put into a chip

At the November 10 ‘One More Thing’ Special Event, streamed virtually from Apple Park, California, Tim Cook and his team at Apple unveiled the first Apple Silicon SoC (system on a chip): M1. Apple Silicon, which has taken close to a decade to perfect, was first announced at the virtual Worldwide Developer Conference 2020 (WWDC20) but now, let’s get into the M1’s intricacies.

Macs and PCs have traditionally used multiple chips for the CPU, input-output, security, and more. Now with M1, these technologies are combined into a single SoC, delivering a whole new level of integration for greater performance and power efficiency. M1 also features a unified memory architecture that brings together high-bandwidth, low-latency memory into a single pool within a custom package. This allows all of the technologies in the SoC to access the same data without copying it between multiple pools of memory, further improving performance and efficiency.

M1, says Apple, is the first personal computer chip built using cutting-edge 5-nanometer process technology and is packed with 16 billion transistors, the most Apple has ever put into a chip.

What about macOS Big Sur?

M1 features an 8-core CPU consisting of four high-performance cores and four high-efficiency cores. Each of the high-performance cores provides industry-leading performance for single-threaded tasks, while running as efficiently as possible. Apple states these are the world’s fastest CPU cores in low-power silicon, allowing photographers to edit high-resolution photos with lightning speed and developers to build apps nearly 3 times faster than before. And all four can be used together for a huge boost in multithreaded performance.

The four high-efficiency cores deliver outstanding performance at a tenth of the power. By themselves, these four cores deliver similar performance as the current-generation, dual-core MacBook Air at much lower power. They are the most efficient way to run lightweight, everyday tasks like checking email or browsing the web, and preserve battery life like never before. And all eight cores can work together to provide incredible compute power for the most demanding tasks and deliver the world’s best CPU performance per watt.

With the new Macs announced at ‘One More Thing’ geared towards content creators (photographers, filmmakers, musicians), M1 was also developed with multimedia handling in mind. Featuring Apple’s most advanced GPU, M1 benefits from years of analysis of Mac applications, including everyday apps and challenging pro workloads. Featuring up to eight powerful cores capable of running nearly 25,000 threads simultaneously, the GPU can handle extremely demanding tasks with ease, from smooth playback of multiple 4K video streams to rendering complex 3D scenes. With 2.6 teraflops of throughput, M1 has the world’s fastest integrated graphics in a personal computer.

A closer look at the M1 Apple Silicon chip

Apple’s recent new chips — including A13 Bionic and A14 Bionic, U1, and more — have been engineered with Machine Learning (ML) in mind. The M1 chip brings the Apple Neural Engine to the Mac, greatly accelerating ML tasks. Featuring Apple’s most advanced 16-core architecture capable of 11 trillion operations per second, the Neural Engine in M1 enables up to 15 times faster machine learning performance. In fact, the entire M1 chip is designed to excel at machine learning, with ML accelerators in the CPU and a powerful GPU, so tasks including video analysis, voice recognition, and image processing will have a level of performance never seen before on the Mac.

Closely following the recent developments from its security perspective, says MEA on the China-backed project With Sri Lanka moving ahead...
Read more
Entertainment

The Madras High Court on Thursday refused to accept a counter affidavit filed by the Hindu Religious and Charitable Endowments (HR&CE) department, during the...
Read more
- Advertisement -