When back in power, DMK will waive SHG loans, Stalin says

SC notice to FRL, others on Amazon plea against HC direction for status quo on Future-Reliance deal 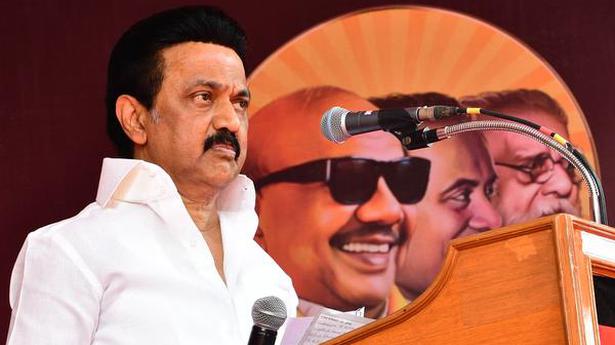 The DMK will also launch special schemes to revive SHGs, and for the welfare of women and children, the party leader said at his election campaign near Pollachi on Saturday

When the DMK returns to power, it would waive the loans Self-Help Groups (SHGs) had availed of from primary agriculture cooperative societies, party leader M.K. Stalin said in his campaign near Pollachi, on Saturday.

The DMK would also launch special schemes to revive SHGs, and for the welfare of women and children, if it came to power, Mr. Stalin said and added that the loan waiver announcement was in continuation of the waiver of jewel loans announcement the party had made sometime ago.

As for the SHGs were concerned, the AIADMK government had neglected them. Mr. Stalin also quipped that he would not be surprised if the State government came out with a similar announcement after seeing his promise, as it was in the habit of doing all that he had promised and demanded of it.

The DMK leader, at the ‘Ungal Thoguthiyil Stalin’ (Stalin in your constituency) event, said the Edappadi K. Palaniswami government had given only tears and difficulty to women but claimed otherwise. “What has this EPS government given to women? Only tears and difficulty. But this government is claiming otherwise. I doubt if Mr. Palaniswami is showing on women the anger he has against former Chief Minister Jayalalithaa and her aide Sasikala.”

Be it the Pollachi sexual assault case or the assault on women or the marginalisation of women self-help groups (SHGs), the AIADMK government had not protected women. It only tried to mislead them and engaged in false propaganda through full-page advertisements. The government could no longer fool people and their anger would reflect in their votes as they would dislodge the AIADMK from power, Mr. Stalin.

Detailing the turn of events in the Pollachi sexual assault case, the DMK president said right from day one, the ruling party was keener to protect the accused than on ensuring justice for the affected women. It was the DMK, by staging protests and by issuing statements, who had forced the State government to act by arresting the accused, a few of whom belonged to the ruling party. If the AIADMK tried to scuttle the CBI investigation or attempted to delay justice, the DMK, on returning to power, would ensure that no stone remained unturned to deliver justice to the affected women.

“I’ll ensure that the accused do not escape either from the rule of law or Stalin’s hands,” he said. On the day the CBI arrested accused K. Arulanantham, Haron Paul and Babu, the AIADMK government had issued advertisements claiming that the State progressed in a victorious march. Had the Chief Minister had some shame, he should have resigned, Mr. Stalin also said.

Instagram accounts take downs and the role of ‘OGUsers’ explained

Facebook said it had taken down many Instagram accounts a few weeks ago, stating that an account-hijacking forum called...
Read more
National

Director Sooraj Barjatya turned a year older today; he is 55 now. And it seemed like the right occasion to watch his legacy-defining blockbuster,...
Read more
National

Delhi now not too distant from Dispur, he says after launching a slew of projects worth over ₹3,300 crore. Accusing the governments that ruled...
Read more

State’s Finance Minister Suresh Kumar Khanna presented the first paperless budget for 2021-22 in the presence of Chief Minister Adityanath With a target of making...
Read more

Delhi now not too distant from Dispur, he says after launching a slew of projects worth over ₹3,300 crore. Accusing the governments that ruled...
Read more

Fuel prices will come down only if Centre and State reduce excise duties, says Stalin

The Opposition leader said TN CM Edappadi K. Palaniswami was enacting a drama by saying his government is not responsible for the hike in...
Read more

He said that with initiatives like de-licensing, de-regulation, export promotion, foreign investment liberalisation, the government has taken several measures to give the defence manufacturing...
Read more
Bharat News