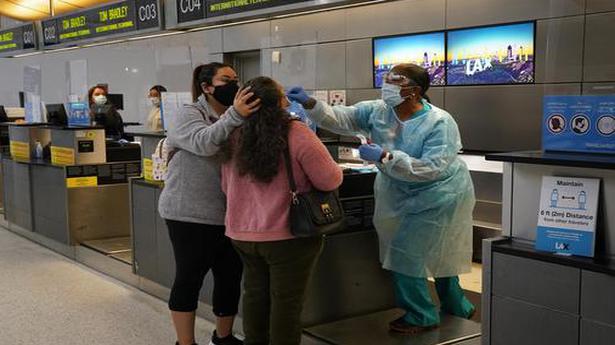 Health professionals within the administration have advised against large indoor gatherings.

The White House plans to hold indoor holiday receptions in the coming weeks despite ongoing COVID-19 outbreaks and the advice of public health professionals urging Americans to sacrifice their normal holiday gatherings to curb the spread of the virus.

U.S. officials have warned against large gatherings on Thursday’s Thanksgiving holiday, instead urging Americans to stay home and forgo travelling to see relatives in a bid to curb the spread of the novel coronavirus and protect vulnerable individuals as cases topped 12 million over the weekend.

While the White House has said President Donald Trump and his wife Melania will remain in Washington this week, skipping their annual Thanksgiving at Trump’s private club in Florida, the first lady plans to hold a holiday reception a few days later on Nov. 30, according to an invitation obtained by ABC News.

That follows a series of White House events in recent months that have been linked to a rash of outbreaks, including Trump’s own bout with the disease from late September into early October. A White House aide and four others have tested positive in recent days.

Stephanie Grisham, a spokeswoman for the first lady, said the White House would provide the “safest environment possible” for the Christmas and Hanukkah celebrations with smaller guest lists than years past, masks “required and available,” social distancing encouraged and hand sanitizer provided.

“Guests will enjoy food individually plated by chefs at plexiglass-protected food stations. All passed beverages will be covered,” she said in a statement. “Attending the parties will be a very personal choice. It is a longstanding tradition for people to visit and enjoy the cheer and iconic decor of the annual White House Christmas celebrations.”

Health professionals within the administration have advised against large indoor gatherings.

“We want everyone to understand that these holiday parties can be super spreader events,” U.S. Surgeon General Jerome Adams told ABC News in an interview on Monday, urging celebrations to be held outdoors with as few people as possible and pointing to recommendations by the U.S. Centre for Disease Control and Prevention.

Still, it appeared as if many Americans were not heeding the advice. While the number of U.S. air travelers was still down about 60% compared to a year ago, federal transportation officials on Monday reported screening the highest number of passengers since March.

A team of top bureaucrats, led by Chief Secretary P. Ravikumar, met Governor Vajubhai R. Vala on Sunday to brief him on the COVID-19...
Read more

“We have to increase the price of carbon and we have to help this transition to happen for entrepreneurs and our households,” he said. French...
Read more

Coronavirus | Half of U.S. adults have had at least one Covid vaccine dose: CDC

More than half of U.S. adults have received at least one dose of a COVID-19 vaccine, government data showed on Sunday, as the White...
Read more

Five wounded in rocket attack on Iraq base hosting Americans

.The agreement includes a $1.65 billion contract for the establishment and operation of a training centre for the Hellenic Air Force by Israeli defence...
Read more
Bharat News