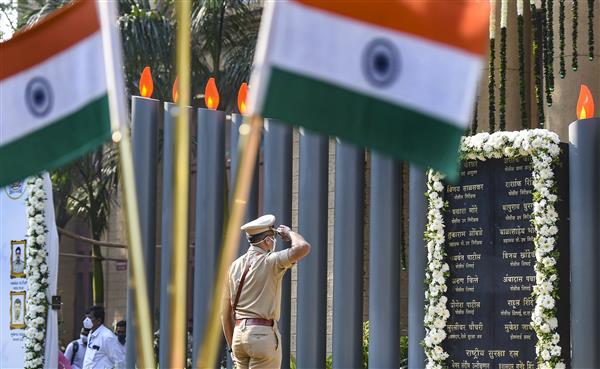 India said on Thursday that it would keep the global spotlight “firmly” on cross-border terrorism and on the epicentre of the global menace, in an apparent reference to Pakistan on the 12th anniversary of the 26/11 Mumbai attacks.

External Affairs Minister S Jaishankar applauded the courage of India’s security forces for continuing to defend the country “so resolutely”.

“Will keep the global spotlight firmly on the menace of cross-border terrorism against India. And on the epicentre of global terrorism,” he said in a tweet.

The visit is seen as important as it comes in the midst of the coronavirus pandemic that has wreaked havoc across the world.

“Twelve years since the horrific 26/11 #MumbaiTerrorAttacks. Pay my homage to its victims. Applaud the courage of our security forces, who continue to defend our nation so resolutely,” he said.

On November 26, 2008, a group of 10 Pakistani terrorists went into a rampage, carrying out coordinated attacks on a railway station, two luxury hotels and a Jewish centre, after they sneaked into India’s financial capital using the sea route in the Arabian sea.

Over 166 people, including 28 foreigners from 10 nations, were killed in the nearly 60-hour assault that sent shock waves across the country and even brought India and Pakistan to the brink of war.

In November 2012, Ajmal Amir Kasab, the lone surviving gunman among the Pakistani group, was hanged to death in Yerawada Jail in Pune.

India has been pressing Pakistan to punish those involved in the dastardly attacks. But the trial of the accused, including Jamat-ud-Dawah (JuD) chief Hafiz Saeed, in the attacks has made little headway so far.

Following the attacks, India has been consistently highlighting the threat of cross border terrorism and how Pakistan has been sheltering and providing support to various terror groups. PTI